After Eclipse, Crazy Lixx and Paul Laine publicly announced that they were pulling out of the upcoming Melodic Rock Fest that is scheduled to take place at The National Theatre in Melbourne, Australia from March 6 to 8, 2020, the festival’s organizers have issued a statement that they are looking at other “high profile” alternative acts to fill the void. 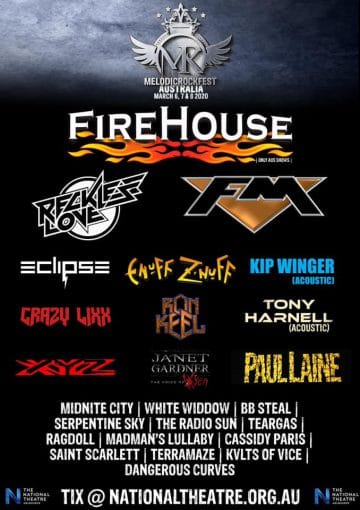 Laine was the first artist to publicly pull out from the event on February 25th followed by Eclipse yesterday and Crazy Lixx today.

“We regret to inform you that due to contractual obligations not being met on the part of MelodicRock Fest Australia, Crazy Lixx have been forced to cancel the planned Australian Tour and will not be performing at the Melodic Rock Festival or any of it’s other scheduled events.

And to clarify, it is not the case that the band is already on site, however two members are in Australia, visiting some friends before the planned tour.”

The following message was posted on Melodic Rock Fest‘s Facebook page less than 30 minutes ago (with slight edits):

“With all of the conjecture and false statements being spread freely over social media we here at Melodic Rock Fest wish to present the facts.

At this stage, Crazy Lixx, Eclipse and Paul Laine will unfortunately NOT be performing at this year’s event.

While we apologize to fans and ticket holders who will be affected by these late withdrawals, we are still working tirelessly behind the scenes to rectify the factors which played a part in this communication breakdown.

Organizers remain committed to bringing you the best in melodic rock and have done everything in our power to bring the full announced line-up of artists to this inaugural event.

Due to factors beyond our control that we hope to have addressed before the commencement of Day 1, these two bands have seen fit to exercise a get-out clause in their contract. While we harbour no ill will towards these acts, we are also still attempting to overcome the impediments to obtain a successful resolution.

We understand the artists’ reluctance to fulfil their contractual obligations but will not discuss further details in a public forum.

The artists that have taken a leap of faith and supported our vision to promote live music in this country are currently enjoying a run of successful sideshows in the lead up to the festival and we thank them for efforts.

In the meantime, we are still hopeful of a resolution that will enable any or all of the mentioned bands to embrace their Australian fans plus we are looking at other high profile alternative acts to fill any missing void.

We ask you to refrain from further contributing to what is already an unfortunate and unforeseen turn of events and allow us the opportunity to work at rectifying the situation.

Refunds and complaints will be addressed should we not resolve these issues before the festival but in the meantime please understand the artists’ right to privacy and discretion.

Once again, we apologize for the confusion and disruption to Melodic Rock Fest 2020 and we will get back to you with further updates as they arise.”