Memorial services for Lemmy to be held at Rainbow Bar & Grill 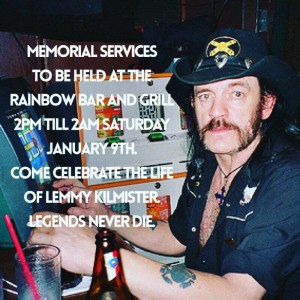 In what has to be considered not to be a surprise, the Rainbow Bar & Grill in West Hollywood, California, USA will be hosting memorial services for Motörhead‘s deceased leader and frontman Lemmy Kilmister.

The Rainbow Bar & Grill has long been considered Lemmy‘s home away from home as the legendary frontman spent a large amount of his downtime at the infamous establishment. Lemmy passed away at the age of 70 on December 28, 2015 two days after being informed that he was suffering from an aggressive form of cancer.

Of note, Metal Allegiance will be playing at the Whisky A Go Go in Los Angeles, California, USA on January 9, 2016.