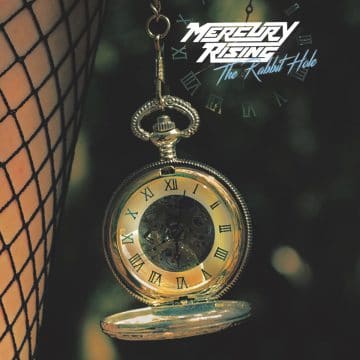 UK rockers Mercury Rising will be releasing their new album The Rabbit Hole on August 25, 2018.

The following message was posted in part on Mercury Rising‘s Facebook page yesterday:

““The Rabbit Hole” will be available to purchase and stream on Saturday 25th August, but you can get your hands on it early at our exclusive pre-release party on the 24th! It’s your choice, but we know where we’d rather be!

Here’s your first sneak peak at the artwork!”

Sleaze Roxx stated the following in its review of Mercury Rising‘s Bad News EP released back in 2016: “The good news is that the songs on Bad News seem to get better as the EP progresses. The guitar work is solid for the most part throughout all the tracks with some creative but borderline excess soloing such as on the last two songs “Into The Night” and “Psycho.” There is also a solid guitar riff for the song “One Shot” on which the entire track is based on. The fact that Mercury Rising started their Bad News album with the weakest song spells disaster for them in my mind because every time I play the album, I have a hard time getting through that opening track. At the end of the day, Mercury Rising have my temperature rising but for the wrong reasons.”