“Metal Allegiance has announced they will release a special EP, entitled Fallen Heroes, on August 12, 2016. The band united to pay homage to the 3 legends – Lemmy Kilmister [of] Motörhead, David Bowie, and Glenn Frey – who impacted not just their lives but the world as well. 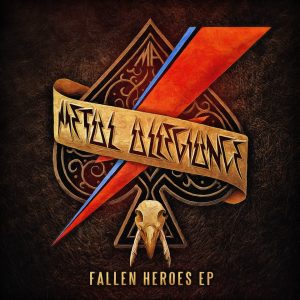 “The end of 2015 and most of 2016 has been a brutal year with many of our heroes passing,” comments Mark Menghi. “When Portnoy called me in January to alert me that Glenn Frey had passed, I literally broke down. That night after having a few Tequila Sunrises in Glenn’s honor, a lightbulb went off… We’re going to record a few tunes to honor our fallen heroes. I called back Mike that evening and asked him what he thought and the next day we were in the studio recording. By weeks end, all guitars, drums and bass were complete. I can’t begin to explain the influence that Glenn Frey, Lemmy, and David Bowie had on me. Each of their music has helped me immensely during some real dark periods of my life and not to mention their influence on me as a musician and songwriter. Lemmy is God, Glenn is King and David is the Architect.”

Alex Skolnick comments: “These brilliant artists have an extensive catalogue that is sometimes on the softer side (with the exception of Motörhead, of course). So when it came to The Eagles & Bowie, we specifically chose tunes of theirs that are riff-based and translatable to high energy arrangements. For Lemmy, we immediately crossed out “Ace of Spades” (great tune but the last thing the world needs is yet another cover version) and chose “Iron Fist,” which we already had a good handle on from playing live and to us is every bit as much a signature Motörhead tune.”

“I’m really excited to be a part of the Fallen Heroes EP” comments Alissa White-Gluz. “I think we have all felt the weight of losing so many great musicians this year. I think these songs are a cool way to pay tribute to a few people who contributed so much to the world of music and showcase a different side of ourselves.”

Recorded at Conclave Studios in New York City, Fallen Heroes was produced by Mark Menghi and Alex Skolnick. The album was mixed by Jay Ruston in Los Angeles, CA and mastered at Sterling Sound New York City by Ted Jensen. The initial sketch of the artwork was created by Mark Menghi and Stephen Thompson (Anthrax) and was later finalized by Marcelo Vasco Arts (Slayer).”

Sleaze Roxx stated the following in its review of Metal Allegiance‘s self-titled debut album: “The idea of Metal Allegiance started in 2011 to get a lot of musicians together for a great live experience. Although the line-up has changed a few times from the initiation, the passion has not changed. These musicians have a love and passion for the music and they want to make sure the fans hear and experience what Metal Allegiance is all about. Portnoy, [Dave] Ellefson, and Skolnick have been around for a long time and some people think they are the best musicians with the instruments that they play. I will admit, I was really excited to hear what these three talented musicians could come up with. I will tell you, they do not disappoint. Any fan of these musicians previous works, will enjoy what they have put together.”