Metal Blade Records CEO Brian Slagel was recently interviewed by Jimmy Kay and Alan Dixon for Canada’s The Metal Voice. Slagel is planning on re-issuing the compilation album Metal Massacre Vol 1 on April 22, 2022, which coincides with the 40th year anniversary of the release of that record. 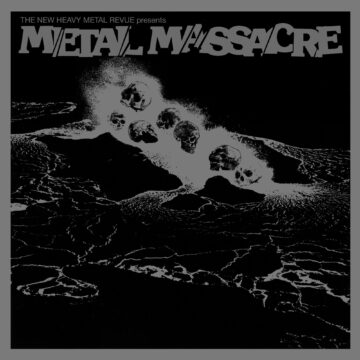 In terms of which version of Metal Massacre Vol 1 will be getting released, Slagel indicated (as provided by The Metal Voice with slight edits): “It’s kind of the two versions combined into one basically, I’ve always wanted to do this. I thought it was going to be a nightmare to put together because back in the day, we just did five year licenses for the songs and we lost the rights for 35 years and I thought, I don’t know if everybody wants to do it again. It took me two hours and I reached out to every band and they immediately said ‘Yes, no problem. We are in.’ It’s got every song that was ever on the original Metal Massacre Vol 1, both Steeler and Ratt. Metallica, they used the second pressing [second song], the one without Lloyd Grant on it. We are only doing it on vinyl ’cause I wanted to keep it to close to its roots ’cause all we did was vinyl 40 years ago and we are only doing 7,000 (copies) of them. I wanted to make it really special and limited.”

When asked about how he included Metallica‘s original song “Hit The Lights” on the original Metal Massacre Vol 1 compilation, Slagel stated: “The Michael Schenker Group played a venue called the Country Club in Reseda, Los Angeles, California in December of 1980, which I found out later everybody from Metallica to Armored Saint were there. All the bands were at that show even though no one knew each other. So I was there with my good friend John Kornarens who basically helped me with the fanzine and the compilation album. So after the show, John sees a kid in the parking lot wearing a Saxon European t-shirt. Now in 1980, nobody in L.A. knew who Saxon was let alone would be wearing a European t-shirt. So John runs up to the kid and says ‘Where did you get that shirt?’  And the kid [Lars Ulrich] said, ‘I just moved here from Denmark two weeks ago. I didn’t think anyone knew who Saxon was.’ And John said, ‘No, no. We are totally into it. My friend Brian and I are really into it so you got to meet him.’

So a couple days later, I don’t remember if it was his house or my house but Lars, John and I got all together and started going crazy over the NWOBHM. Lars, moving here from Denmark, didn’t think he would know anybody. He didn’t think he would find any friends who were into the scene, so we all became friends because of that. So fast forward to a year and a half later, so I am putting together this compilation album [Metal Massacre] and Lars called me up and said ‘Hey, if I put together a band, can I be on the record?’ I said, ‘Sure, we need bands on the record. Why not?’ So I guess the story was he and James [Hetfield] recorded everything and then Lloyd Grant played the lead and that was the original “Hit The Lights”. So they brought me a cassette tape at the very last minute. It almost didn’t make it on the record. Lars was probably an hour away from not getting it on time. So they brought a cassette and it cost $50 dollars to bump it up to quarter inch tape and none of us had the money. Luckily, John Kornarens had 50 bucks so he paid the 50 bucks and Metallica ended up on the record. And I didn’t hear it [the song] until later. The recording wasn’t great but the song was pretty decent.”