Metal Church have unfinished business and to tour with Armored Saint

Ruben Mosqueda of Sleaze Roxx recently spoke to Metal Church‘s frontman Mike Howe about his initial departure from the band, reconnecting with Vanderhoof for the band’s new album XI and touring the US. 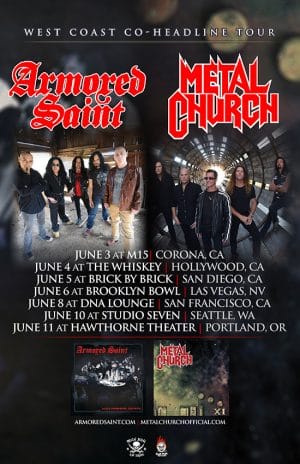 Metal Church, the veteran Seattle metal act, broke in 1985 when Elektra Records reissued their self-titled debut. The band founded by guitarist Kurdt Vanderhoof, who has roots in the Bay Area, then relocated to Aberdeen, Washington where the group originates from. After Metal Church followed up their debut with their critically acclaimed The Dark, original vocalist David Wayne departed in 1988 which was preceded by Vanderhoof departing from the ‘touring’ line-up. Vanderhoof continued being a creative force from the production and songwriting side until his return in 1998.

Mike Howe, formerly of the band Heretic, stepped in as vocalist of Metal Church and debuted with 1989’s Blessing In Disguise. The album featured the hard rock/metal radio hit “Badlands” which has been a staple in the band’s set since. Howe left Metal Church in frustration shortly after the release of his third effort with the band Hanging In The Balance. “I think the creative magic between I and Kurt [Vanderhoof] is obvious, but it was sucked out of the music on that record. I left the music business after Hanging In The Balance. At the time, our management pushed the band in a direction that I didn’t approve — I was embarrassed! Did you remember the artwork? That was only part of what went wrong.” recounts Howe with disgust to Ruben Mosqueda of Sleaze Roxx.

Vanderhoof pressed forward after Howe’s departure with singer Ronny Munroe who had big boots to fill, following original vocalist David Wayne, then Mike Howe respectively. In 2014, Monroe departed having issued his final recording, 2013’s Generation Nothing. Rather than beginning a search for another singer, 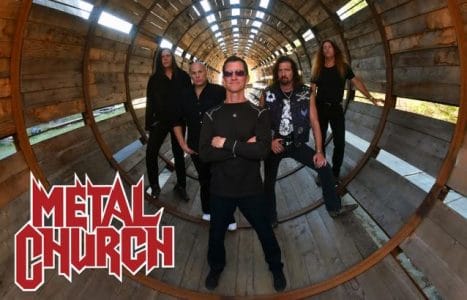 Vanderhoof instead reached out to Howe. Having been away from the music business, settled into ‘civilian life’ and having raised a family; Howe realized that he and Vanderhoof had unfinished business. “If you hear XI, you can hear the chemistry that we have as a band. It’s simply undeniable. We had an abundance of material, so we released an ‘international’ version for people that wanted something a little.” says Howe of the deluxe edition of XI.

Metal Church are currently in the midst of an East Coast tour; then it’s back home before a couple trips to Europe for the summer European Festival appearances. “We’d love to play more dates in America. It’s home but the reality is that it’s up to promoters to make us offers that are financially sound for us. We’re not kids anymore. We can’t ‘just’ jump in a van and hit the road. We have responsibilities, families and we’re older.”

XI debuted at No. 57 on the Billboard 200, having shifted 11,000 equivalent album units in the week ending March 31, 2016. XI was released on March 25, 2016 via Rat Pak Records. The album was produced by Vanderhoof and co-produced by Chris ‘The Wizard’ Collier. With tracks like “Killing Your Time” and “Reset”, it’s no wonder why XI charted so well. Metal Church are back and they’ve issued their most potent effort since Blessing In Disguise. As Sleaze Roxx got set to go online with this piece, Metal Church announced that they were gearing up for a tour of the West Coast with So Cal’s own Armored Saint. Talk about a match made in ‘heavy metal heaven!’