Veteran heavy metal rockers Metal Church consisting of Mike Howe on lead vocals, Kurdt Vanderhoof and Rick Van Zandt on guitars, Stet Howland on drums and Steve Unger on bass have released a video for the title track from their new upcoming album Damned If You Do, which will be released via Rat Pak Records on December 7, 2018. 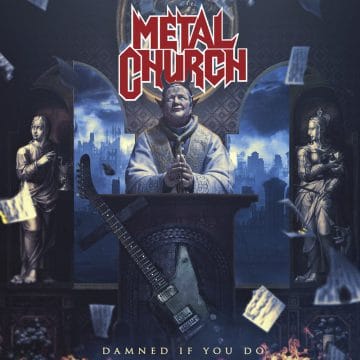 “West coast metal veterans Metal Church will release their 12th full length studio album Damned If You Do via Rat Pak Records on December 7, 2018. The latest release is the follow up to their highly successful 2016 album XI, which saw the return of legendary front-man Mike Howe. Damned If You Do is a cross between the band’s iconic “Blessing In Disguise” and “The Human Factor.” This new offering features ten fully-charged, classic-metal influenced songs that showcase the sound that has garnered the band a solid fan-base for over three decades.

Damned If You Do is something truly unique and special. The songs are powerful, precise and Metal Church’s musical vision is unified. From the haunting opener “Damned If You Do” to the final hard-edged track “The War Electric”, this new album is sure to resonate with fans from the band’s early years while at the same time, garnering new ones. Songs like “By the Numbers”, “Guillotine” and “The Black Things” are sure to become instant favorites!”

Metal Church‘s “Damned If You Do” video:

Metal Church “Damned If You Do” Official Video