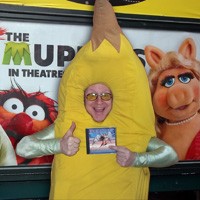 SplitScreen Entertainment, producers of the tribute albums ‘KISS My Ankh: A Tribute To Vinnie Vincent’ and ‘Whole Lotta Love: An All-Star Salute To Fat Chicks’, is coming to the aid of its friend and colleague, rock ‘n’ roll comic C.C. Banana. A performer on both of the aforementioned tributes, C.C. Banana is best known for his humorous interviews with members of such bands as Twisted Sister, Quiet Riot, Cinderella, KISS, L.A. Guns, Winger, Ratt, W.A.S.P. and many others.

C.C. was recently in the process of recording a solo album (in commemoration of his 10th anniversary) when his family was struck by severe financial hardship, brought on by the sudden decline of an ailing family member. As a result, he is now on the verge of losing the house he has lived in since birth.

Click here to view all of the current auctions.

Also being auctioned are many of C.C. Banana’s own rock & roll treasures and pop culture collectibles, including rare and out-of-print CDs, DVDs, action figures, toys and assorted collector’s items C.C. has acquired over the years. SplitScreen Entertainment will also be helping in its own way via proceeds from sales of its two albums featuring C.C. Banana. Fans wishing to donate directly may do so via GiveForward in exchange for various levels of rewards. SplitScreen Entertainment will deduct no administrative fees and every cent raised will go toward C.C. Banana’s immediate financial concerns.