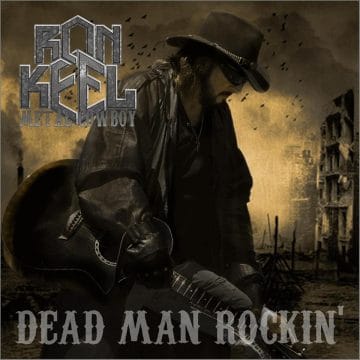 Keel frontman Ron Keel also known as the ‘Metal Cowboy‘ will be releasing a new single “Dead Man Rockin'” which will premiere on the radio station KBAD 94.5 during The Morning Crash on Monday, November 28, 2016.

“My first new original music in two years – tune in to KBAD 94.5 during The Morning Crash next Monday Nov 28 for the world premiere of “Dead Man Rockin'” – dedicated to everyone who’s ever gone to work dead tired and kicked ass anyway! Available next week worldwide on iTunes and at http://ronkeel.com/“

Back in 2011, Sleaze Roxx interviewed Ron Keel and asked what prompted him to change to country music in the ’90s to which he replied: “You have to realize that in the end of the ’80s all the bands like us… like when grunge happened in 1991/92 we went from the top of the world to being slammed right in the fucking ground. We went from being gods of rock’n’roll to being a joke overnight — everybody, almost all of the bands hit the ground really, really hard. When I hit that ground I realized there was no more record deal, and had to sell the beach house and the sportscar. What did I have left? I had my guitar and my voice. This was my way to avoid the drugs, it got really tough and I was able to express myself through that type of music and I was able to release my country music and that paid my bills and I expressed myself by being able to perform any music.”