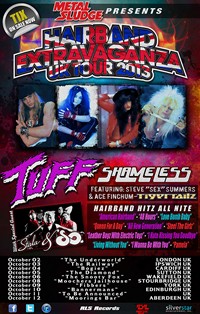 Are you ready to Set The Night on Fire? Are you Young & Crazy? Do the Good Guys Wear Black and all the girlz wanna be Queen For A Day? If you answered yes to any of this — then this event is one not to miss.

Hailing from Los Angeles, California, Tuff heads to England for the first time in years. Original bassist and band founder Todd “Chase” Chaisson returns for his first UK appearance since the group’s Astoria show in London back in 1991. Chase says, “We are coming back, and ready to put the metal back into hair metal! I can’t wait to come rock out with our English fans again.” Lead singer Stevie Rachelle adds, “We’ll be playing a full set of Tuff music spanning 25 years including; “American Hairband”, “I Hate Kissing You Goodbye”, “All New Generation” and even our 1988 classic “Summertime Goodbye”.”

Munich Germany is the home base for Shameless, but for this tour the group features members from Hollywood and London. Alexx Michael (bass) and his partner in crime BC (guitars) are stoked to welcome local blood with Ace Finchum on the drums. Ace is an original member of Tigertailz and this will be his first tour with Shameless. The stick twirlin’ can slammin’ blond Brit will take the German based rockers to noise level critical when the tour kicks off at The Underworld in London. Shameless’ forthcoming sixth studio effort, ‘Beautiful Disaster’, hits the streets on October 1st and the band are excited to bring this new music to the masses starting with England.

Save the sex for last. Isn’t that the old saying? Well close enough. Steve “Sex” Summers will front Shameless for the first time since 2007. Summers is without a doubt one of the genre’s few who have stood strong with his Hollywood roots. Hairspray, make-up, fur coats and lipstick will be on parade when he belts out hits like “48 Hours To Rock” and “Leather Boyz With Electric Toyz.” A true Glam God if there ever was one — and unmistakably the voice of Pretty Boy Floyd — Summers is always ready to rock. “I have been laying low for a year now. It’s time to show the UK a damn good Glam Rock time,” added the Sunset Strip bad boy.

The tour plays ten cities throughout England and also brings Stala & So. along for the ride. Based out of Helsinki, Finland, the band are no strangers to the European tour circuit and last visited England in support of Vain in early 2012. Stala & So. have just released ‘Play Another Round’ (Escape Music Ltd), the follow-up to their 2011 debut ‘It Is So’. The band were the Finnish representative in Eurovision with their hit song “Pamela”.