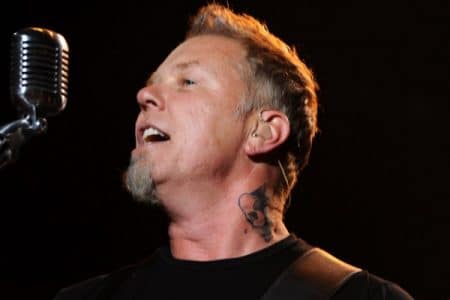 Three days ago back on February 4th, Metallica revealed that their singer and guitarist James Hetfield was under doctor’s orders not to sing a single note due to continuing throat issues, which forced the band to reschedule one of their scheduled concerts at the Royal Arena in Copenhagen, Denmark on February 5, 2017.

Hetfield‘s throat issues have apparently resolved to the point that he can sing again as Metallica have just declared earlier today that they will be playing their next scheduled concert at the Royal Arena tonight.

“We’re ON! Copenhagen, we will see you tonight at the Royal Arena! Doors open at 5:30 PM and we’re looking forward to hitting the stage and resuming the week long celebration of the new venue. See you there!”

Sleaze Roxx stated the following in its review of Metallica‘s latest studio album: “Hardwired…To Self-Destruct could have been a very good, almost pure-Metallica-thrash record with a track count of eight songs and the duration would still have been respectable at around 50 minutes. Sadly, it’s not the case and at 77 minutes, the impact of the album is heavily diluted. Besides being simply too long, a lot of Hardwired…To Self-Destruct is in the “what could have been” department as most of the songs are heavily affected by the production.”