The PRP has reported that Metallica‘s “Master Of Puppets” song was first played when Megadeth was announced as the winner of the “Best Metal Performance” for Dystopia at the Grammy‘s pre-show, which took place earlier tonight. 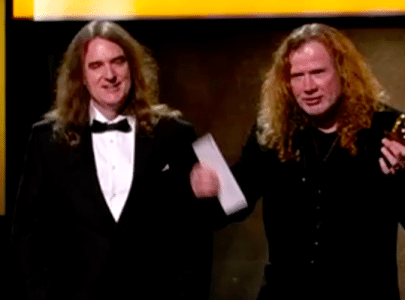 stated in part: “Megadeth‘s ‘Best Metal Performance’ Grammy win today, February 12th, wasn’t without a bit of irony as a rendition of Metallica‘s “Master Of Puppets” played as the band walked the aisle to accept the award. Vocalist/guitarist Dave Mustaine seemed to take it all in stride, riffing along as they walked to the stage.”

The problems between Mustaine and Metallica over the last couple of decades before they slowly patched things up in the last 15 years have been well documented. Wikipedia states the following in part about Mustaine‘s time in Metallica (with slight edits): “…On April 11, 1983, after Metallica had driven to New York to record their debut album, Mustaine was officially fired from the band because of his alcoholism, drug abuse, overly aggressive behavior, and personality clashes with founding members Hetfield and Ulrich, an incident Mustaine refers to as “no warning, no second chance”. The band packed up Mustaine‘s gear, drove him to the Port Authority Bus Terminal, and put him on a Greyhound bus bound for Los Angeles. It was on this bus ride that Mustaine scribbled some lyrical ideas on the back of a hand bill, which would later become the song “Set the World Afire” from the 1988 Megadeth album So Far, So Good… So What!

During his time in Metallica, Mustaine toured with the band, co-wrote four songs that appeared on Kill Em All, and co-wrote two songs that would eventually appear on Ride the Lightning. Mustaine has also made unverified claims to have written parts of “Leper Messiah” from Master of Puppets. He also recorded several songs with the band including the No Life ‘Til Leather demo tape. A few of the songs he wrote with Hetfield and Ulrich went on to be re-recorded by Metallica. The most well-known of these is “The Four Horsemen” from Kill ‘Em All, which Mustaine wrote as “The Mechanix” and later released on Megadeth‘s debut album with the original lyrics as “Mechanix”.

Mustaine stated in part the following as he accepted the Grammy on behalf of Megadeth [as transcribed by Sleaze Roxx]: “Wow. Fantastic. It took only 12 tries to get this. Last time we were here, we were talking to Kenny G. and he asked me how many times we were here. And he goes ‘Well 12, 11 isn’t that bad.’ And I said, ‘How many times did it take you?’ ’21 times.’ And I said, ‘Oh my God! If it takes 21 times, I don’t know if I will live that long. Anyways… I want to thank Jesus Christ, my wife, my children, all the band’s wives and kids. I want to thank our management, our label, our agent, our attorney, our crew, all of you — especially the metal community…”