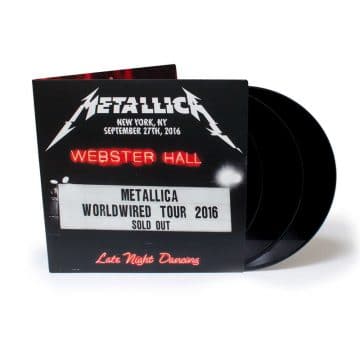 Thrash metal giants Metallica will be releasing a live album apparently entitled Live At Webster Hall on vinyl on May 5, 2017. The live album is from Metallica‘s sold-out Fifth Members only Webster Hall show in New York City, New York, USA on September 27, 2016, which includes the live debut of the song “Moth Into Flame.”

Live At Webster Hall is being released on Blackened Recordings, was mixed by Greg Fidelman, recorded by Mike Gillies,  mastered by Chris Bellman at Bernie Grundman Mastering and the digital editing was done by Dan Monti and Sara Lyn Killion. It is apparently currently only available on Metallica.com and in pop-up stores in select cities on the band’s North American WorldWired 2017 Tour.

The following information was found on Metallica‘s website today:

“As we get ready to hit the road and kick off the North American tour, we thought it might be cool to revisit the very beginning of Hardwired… by pressing one of the live release celebrations on vinyl. It all started with the Fifth Member show at Webster Hall in New York City in September of last year, so this Friday, May 5th the three LP set of that show will be available exclusively online here at Metallica.com as well as in our pop-up stores in select tour cities this summer (more on that soon!).” 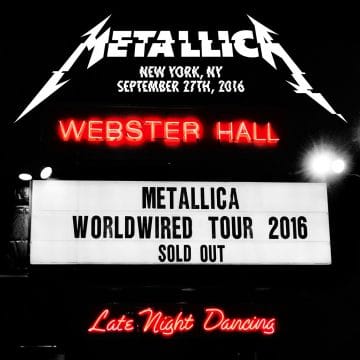