To celebrate the 20th year anniversary of the release of their historic S&M album, Metallica will be teaming up with the San Francisco Symphony once again in a live setting and this time at the Chase Center in San Francisco, California, USA on 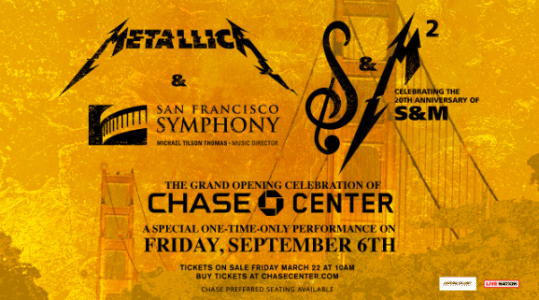 “In celebration of the historic Grand Opening of San Francisco’s Chase Center, we are beyond honored to be joining together with the San Francisco Symphony for the first time in 20 years! Join us on Friday, September 6th for S&M²: a one-night-only show featuring the SF Symphony and legendary conductor Michael Tilson Thomas.

James and Lars joined Michael, along with representatives from the Golden State Warriors and San Francisco mayor London Breed, to make the announcement at the Chase Center today.

The original S&M concerts were performed by Metallica and the San Francisco Symphony conducted by the late Michael Kamen in spring of 1999 at the Berkeley Community Theatre. The S&M² concert will feature the first live performances of these arrangements in 20 years, plus the first ever Metallica/San Francisco Symphony renditions of songs written and released since the original S&M, with new orchestral charts by Bruce Coughlin.

“No Leaf Clover” by Metallica from the album S&M © 1999Lyrics: And it feels right this timeOn this crash course with the big timePay no mind to the distant t…