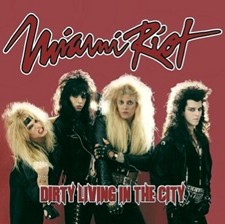 WOW! Is the first word that comes to mind when you see and hear MIAMI RIOT. Ladies and gentlemen these guys are the real deal! Leaving a nice scar on the late 80’s and early 90’s Glam scene, MIAMI RIOT have the looks, the hooks, the chops, the songs and the record you have been waiting to feast on for years. Demon Doll Records is proud to present the newest addition to our family and some of the nastiest, sleaziest Glam Rock on the planet. If this is the music you love — you will not be disappointed!

They attack every song with reckless abandon on this 6 song Glam and Sleaze masterpiece ‘Dirty Living In The City’, rarely seen or heard even back in the hay day. Every song on this record is infectious and is dripping in Sex, Drugs and Rock ‘N’ Roll. The boys are louder then hell on the killer cuts “Boys Are Gonna Rock”, “Dirty Living In The City”, “Push Comes The Shove”, Shake It Up”, “Crash And Burn” and the should-have-been smash hit radio anthem “Rock And Roll Suicide”.

If you’re a fan of early Cinderella, Tigertailz, Roxx Gang and Motley Crue then you will love this band and this record!!

This album is officially licensed from the band, silver pressed and has been digitally re-mastered and restored. We are offering this classic for an introductory price of $12.99 for the first 2 weeks of release, so get your copy today before they sell out at http://demondollrecords.com/Miami_Riot_-_Dirty_Living_In_The_City.html