Former Van Halen bassist Michael Anthony was recently interviewed by the News-Herald and advised how Sammy Hagar & The Circle first started: “Sammy was doing some food thing in Florida on the beach with his buddy (celebrity chef) Emeril 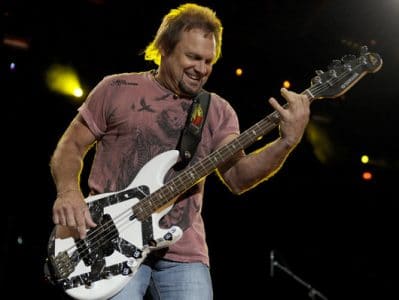 Lagasse. He wanted to put together a little band and play some songs, so he called me and grabbed his guitar player Vic Johnson. Then he said, “You know who lives out here in Florida close by to where we’ll be doing this thing? Jason Bonham.” So he gave Jason a call, and Jason said he’d come out and jam. That’s basically how the whole Circle thing started. And it’s pretty much the same way Chickenfoot started, which will be back, by the way, at some point, if we can ever get our drummer (Chad Smith) off the road with The Chili Peppers. With The Circle, it’s almost like going out on vacation. You get to fly around on Sammy’s jet, which, come on, right there … then we get on stage and play the hits for a couple of hours.”

In terms of whether this is the right time to reunite with Van Halen, the bassist stated: “Well, I mean, partly because you obviously see all of these other bands doing it these days. And also for Van Halen’s fans. Maybe some kind of proper closure or something. I’m not sure. Everybody in the band is still relatively healthy and alive. So there’s one thing right there. And Sammy has brought it up quite a few times in interviews he’s done. He’d be open to doing a tour with him and Dave (Lee Roth) singing.”

You can read the rest of the interview with Michael Anthony at News-Herald.