Michael Grant says “no” to Ratt as he feels that he “got nothing” at the end for his time spent in L.A. Guns 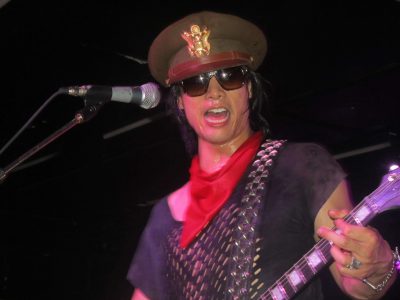 Michael Grant & The Assassins will be releasing a new studio album titled Always The Villain via Frontiers Music Srl on July 10, 2020. Grant played in the L.A. Guns version spearheaded by drummer Steve Riley and singer Phil Lewis from 2013 to December 2016 before defecting along with Lewis from Riley‘s version of the band to guitarist Tracii Guns‘ latest version of the group. In March 2018, it was revealed that Grant was no longer a part of L.A. Guns but it is not clear whether the guitarist left on his own or got fired from the band.

In terms of receiving offers to play in other bands, Grant indicated (as transcribed by Sleaze Roxx):

“Well, the bands have been calling for years now for me to play guitar for them and I’ve turned down pretty much, pretty much everybody, the latest being Ratt. They asked me to take the lead guitar spot or audition for it. They were kind of courting me a little bit for weeks and I kept telling them I am in the middle of recording [the new album from] Michael Grant & The Assassins and that if they had, you know, another guitar player, whatever that fits the band, that guitar player would probably be a lot better because I’m just too busy. And I just had to turn it down because at some point, you’ve got to bet on yourself. You know, I gave a big chunk of my time to L.A. Guns and in the end, got nothing. So after that, that was a huge learning experience for me and I just — even if I was struggling where I was at the time, I had to convince myself, ‘Hey! Bet on your fucking self. Stop making other people sound good and fucking go for it!’ You know, and that’s what I am doing now man!”

You can listen to the interview with Michael Grant by Mitch Lafon for the Rock Talk with Mitch Lafon podcast below: