After apparently getting fired from L.A. Guns for undisclosed reasons, Grant started back up his group Michael Grant + The Assassins and added drummer Ian Corabi and bassist Pat Thai (also known as Patrick Groves) to round out the band. 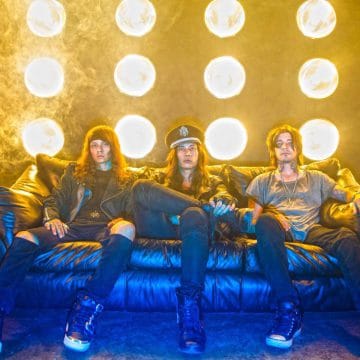 Michael Grant started his professional music career by forming EndeverafteR in Sacramento, Ca in 2004, in which he performed as the vocalist, lead guitarist and chief songwriter.

In 2006, the band signed with Epic Records and recorded their debut album, From the Ashes of Sin, with producer Stacy Jones. That same year, they toured with Cinderella and Poison and opened up shows for Kiss in Japan, bringing their music worldwide.

The band released their full-length debut album “Kiss or Kill” on Indie label, Razor & Tie, in October 2007. The single “I Wanna Be Your Man” hit #25 on the U.S. Billboard Mainstream Rock charts.  The song was featured in Rock Band 2, Guitar Hero III and also appeared in an episode of the TV Show, Scrubs, titled “My Jerks”. Later that year, the band toured with Trapt and Fuel.

The band’s song “No More Words”,  appeared on WWE The Music, Vol. 8 and was used as Champion Wrestler Jeff Hardy‘s entrance theme. They released their second single “Baby, Baby, Baby” in late May, which did well on the Mainstream Rock charts.  Throughout 2008, they performed on the Motley Cruise, toured with Roadrunner Records artist Airbourne,  appeared on the “Road to Destruction” tour supporting Saving Abel, and opened up for Alter Bridge, Joan Jett and Shinedown in El Paso, TX, at the KLAQ Downtown St. Festival.

In January 2013, Michael joined LA Guns, replacing Stacey Blades on guitar. The band played numerous shows across the United States, Europe, and Japan, as well as regularly performing on the Monsters of Rock cruise as well as many festivals worldwide.

In October 2017, LA Guns released  “The Missing Peace” album, with Michael having writing credits on two songs, “Don’t Bring a Knife to a Gunfight” and “The Devil Made Me Do It.”

In March 2018, after five years of dedication, Michael left the band.

After Michael’s departure from LA Guns, he has begun working on his solo project, Michael Grant + The Assassins, with Patrick Groves on bass and Ian Corabi on drums.  He is currently recording an EP due to be released in the summer of 2018 with shows and tours to follow such as The Monsters of Rock Cruise 2019.”