Michael Grant thinks addition of “Purple Rain” in L.A. Guns’ live set led to his departure from the band 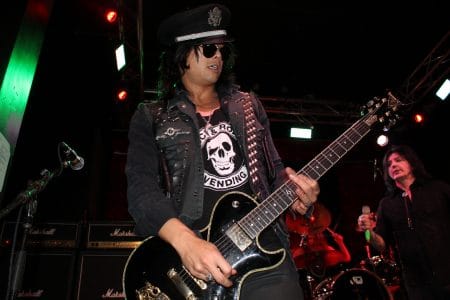 During Grant‘s time in L.A. Guns with lead vocalist Phil Lewis and guitarist Tracii Guns in the line-up, the band ended up adding a cover of Prince‘s “Purple Rain” in its live set, which was seemingly well received.

In terms of how the song ended up getting added to L.A. Guns‘ live set, Grant indicated: “I’m a huge Prince fan, especially ‘Purple Rain.’ That was one of those albums that changed my life. At the time, Prince had just died and the O.G.’s of L.A. Guns decided they needed to take a break during the set so they could make some costume changes, grab a drink or smoke or whatever. It was meant to be a filler during the set, while the guys took a break. The first night I did, it was so well received. I recall there were people shouting it at the top of their lungs from the balcony!

We did that a few times but over time, it became a staple in the set, which some [in the band] people hated, but it was one of those things that I didn’t want to do in the first place. I was asked to fill five to seven minutes in the set and it was even suggested that I could do an Endeverafter song, but I didn’t want to do that. This isn’t Endeverafter, this was L.A. Guns. I don’t need that kind of tip of that hat cutting into your legacy. “Purple Rain” was perfect because I wanted to honor him, it took off and it ultimately resulted in my departure from L.A. Guns.”