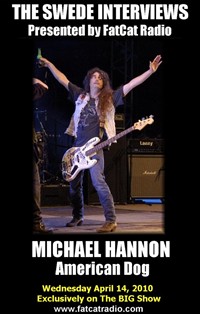 The FatCat Radio Network (www.fatcatradio.com) will be airing an exclusive interview with Michael Hannon of American Dog on The BIG Show hosted by One Angry Swede this Wednesday April 14, 2010. The BIG Show airs from 7pm – 10pm CDT. The interview is slated to begin at or around 8:00pm.

Michael touches on a number of topics in the interview: A busy touring schedule including upcoming shows with Nashville Pussy, Rhino Bucket, & Broken Teeth. The difficulty in picking set lists, the importance of album covers, Salty Dog re-issue news, why being called a prick isn’t necessarily an insult, and most revealing…the one beer he doesn’t like !