Helloween singer Michael Kiske was recently interviewed by Jimmy Kay from Canada’s The Metal Voice and spoke about the lip synching playback that he tried while performing with the band early on during its Pumpkins United Tour given that he was experiencing voice issues. 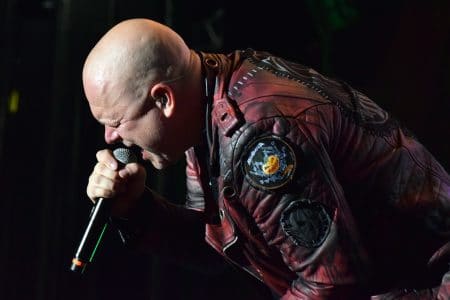 Kiske stated (as transcribed by The Metal Voice with slight edits): “It was not all playback. I’m quite glad I did it once because I  never done anything like that and I am certainly not going to do it anymore because I can’t, it just doesn’t work. The situation was I had an infected throat already before the first show. I wanted to skip the shows and the management said we cant start this tour with cancelling shows. So they talked me into it, the whole band made that decision and then management came to me and said ‘Michael — we have recordings of you from six weeks earlier. It was recording we did in some rehearsal.’ And they said ‘You just go out and sing and if the sound guy sees you are losing your voice, he will sneak the playback track in.’ I didn’t want to do it but I said I will give it a try. I’m so used to singing live of course so I messed it up. I pulled the microphone to the audience when the sound guy had my voice out there. I did it cause they talked me into it. We only did a few bits here and there. I am not going to do that anymore. the next time when I don’t have a voice I will either cancel the show or I do it the way I can.”

In terms of a new Helloween album with the Pumpkins United Tour line-up, Kiske advised (as transcribed by The Metal Voice with slight edits): “That wasn’t the original plan. It’s step by step. Since everything worked out on tour and we got along, we said ‘Let’s make a record with two singers.’ Artistically its an interesting thing to do because we are different type of singers and you can work with that in terms of songwriting…. In regards to musical direction, I am not a main songwriter. I have an opinion  and I don’t even know if I will be writing any songs but there are other musicians in the band who I consider the key songwriters. The songwriters are [singer] Andy [Deris], [guitarist] Kai [Hansen], [guitarist Michael] Weikath and [guitarist] Sasha [Gertsner] in the end. The musical direction  will depend on what they come up with. I would love to sing some stuff in the Keeper vein.  We are writing next year and we are looking at releasing the record in 2020, there is no hurry.”

You can listen to the interview with Michael Kiske by The Metal Voice below:

For a quote for The Metal Voice T-shirt please fill out form herehttps://www.themetalvoice.com/themetalvoicestoreTheme Song by DrangonsclawJimmy Kay from Ca…