Monroe didn’t mince any words as he indicated:

“Oh forget that. That was a mistake. That was the worst thing that ever happened to me. Usually I get the quality of my stuff with that being the most important thing for me. I don’t care what, just as long as the albums I make are great. When Steve Stevens approached me and wanted to work with me, we made some demos for about a year. It seemed like it was going in the right direction. The guy looked the part and he’s a great player but then I was kind of concerned about him doing that two hands on the 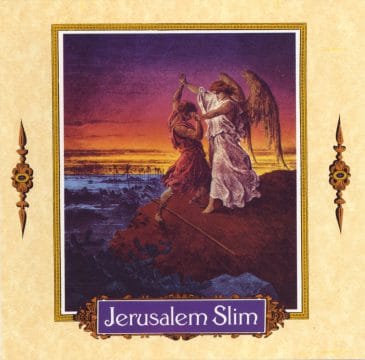 neck and noodling. He can play the Chuck Berry style too. So he did. I wanted Little Steven to produce that. Steven produced the Demolition 23 album. That’s why it’s such a great record. If Steven had produced the Jerusalem Slim album, it could have been good but then the record label wouldn’t go for that. Polygram wanted Michael Wagener, this German metal producer, who was the flavour of the month at the time. He had mixed Ozzy Osbourne’s ‘No More Tears.’ They thought he was the flavor of the month. Them two together, it just turned to shit. The whole record. I tried to stop it, then I couldn’t. My manager didn’t support me.

We were in L.A. doing guitars and it was supposed to be two weeks and it turned into three months of hell. My A&R guy was in New York and I just couldn’t stop it. It was my deal with the record label. We came up with a name, Jerusalem Slim, so it wasn’t a Michael Monroe record. I suggested they call it Michael Monroe, ‘Fakin’ It’! [Laughs] The label wouldn’t go for that. I said “Hey, the band is called Jerusalem Slim” which Sami Yaffa suggested. It’s slang for Jesus right? It became so anal retentive, complicated and stripped the soul of the album. Of course, Michael Wagener is encouraging Steve to play all these solos a million notes per second. I couldn’t stop it and it ended up costing over $700 000. I would have rather given that money to the homeless. I already owed for ‘Not Fakin’ It’ because they pulled the plug on that record too when I asked them to stop that commercial they had on TV. It said, “Michael Monroe — The brains behind Hanoi Rocks!” Hanoi Rocks had no brains. That was the best thing about the band. I didn’t want to be misrepresented. They said, “You don’t like the commercial?” I said, “No” and they said, “Okay, you want us to pull it?” I said, “Yes!” So they pulled the commercial and they pulled the plug on the whole album. I thought they were going to make a newer commercial but they said, “When you sell millions of records, then you can make demands like that!” I said, “If I’m not presented right, I’d rather do it on my own terms than not at all!” So therefore, I ended up owing there label about a million dollars at the end of Jerusalem Slim. All I could do was get off the label. It took me over a year.

That whole project kind of ruined my career. The worst thing I think was that they put out the album. Then the thing was that at the mixing stage, when I had already just given up all hope, Steve Stevens comes up to me and says, “Hey Michael, Wagener’s mixing it all wrong!” I said, “What? You guys had something in common. You knew something that I didn’t know! Now you’re having a falling out with him?” I said, “Forget it. This album was done wrong from scratch. We recorded wrong. It’s produced wrong. Everything’s wrong with it! We had some songs that could have been good, but it was all wrong!” So he says, “Well, the only thing we can do to save it is to start from scratch”. Which he agreed to do. He said, “Okay, let’s start from scratch!” We went back to New York and we were supposed to start over. We even had this other guy mix one of the songs. It sounded better, but then Steve just disappeared.

Next thing I know, I saw [Steve] playing with Vince Neil, the Mötley Crüe singer, [who was] starting a solo career. I saw the MTV awards ceremony on TV and Steve was playing with Vince Neil all of a sudden. He disappeared and ended up playing with him. As I looked at him, I said, “Well, forget about this!” The worst thing was that they put out his album and that was the worst thing that happened to me. Really that whole thing ruined my career. It took me over a year to get off the label. My deal was points for like ten years, but then a little over a year into it. One day, my lawyer called me and said, “Look Michael, they dropped you!” I said, “Alright! Fantastic! Thank God!” I called Little Steven and said, “Steven, I’m free! Now we can make a record that I always wanted with you producing!” And he says, “You know Michael, it’s great! One day, you make a million and next day you don’t!””