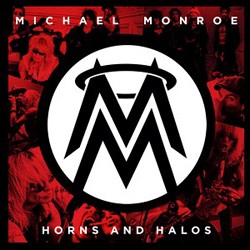 The arresting cover art is based on an idea from Swedish guitar star Dregen, who features in Monroe’s current touring and recording line-up. “I love logotypes that are a ‘little secret’,” says Dregen, “You know, the ones that are more like signs — Van Halen, Crass, HIM’s Heartagram, etc. That was the starting point…”

‘Horns And Halos’ — mixed by Petri Majuri at Seawolf Studios, Finland — is the follow-up to the former Hanoi Rocks’ frontman’s 2011’s critically-acclaimed ‘Sensory Overdrive’, winner of Classic Rock Magazine’s ‘Album Of The Year’, voted the 6th best album of the year by Sleaze Roxx readers and a #1 record in Monroe’s Finnish homeland.

Monroe’s touring and recording outfit — bassist Sami Yaffa (ex-Hanoi Rocks/New York Dolls), guitarist Steve Conte (ex-New York Dolls/Company Of Wolves), drummer Karl ‘Rockfist’ Rosqvist (ex-Chelsea Smiles/Danzig) and Dregen — have been hard at work in the studio, providing creative support for a frontman whose reputation is genuinely global and whose influence continues to be felt, with musicians of all ages (from Dave Grohl to the original Gun N’ Roses members) citing Michael’s ground-breaking career as a source of inspiration.