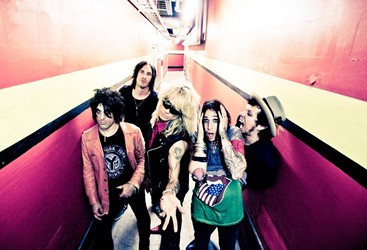 One of Sweden’s most popular and successful guitarists, Dregen will now join the ranks of Michael Monroe’s band! Dregen, best known as the guitarist of Backyard Babies and also as the founding member of the Hellacopters, has taken the place of Ginger who left the Michael Monroe band earlier this month due to a management dispute.

Dregen was a member of the Hellacopters from the band’s starting year in 1994 until 1998 after which Dregen decided to focus on his other band Backyard Babies, who are currently on a long hiatus. In addition to playing with Michael Monroe’s band Dregen is starting work on his first solo album.

Dregen is known first and foremost as an excellent guitarist and songwriter, and as an extremely energetic live performer. His first gig with Michael Monroe will happen on the 26th of June when Michael Monroe will play a gig supporting Foo Fighters at Kalasatama, Helsinki, Finland.

Says Michael Monroe, “Dregen is the perfect choice for this band. We are a group of very strong individuals and we really needed a great personality as a guitar player. Dregen has the whole package together — he’s a killer guitarist, a brilliant showman, looks great and has the right kind of attitude and taste in music.I feel very glad and lucky that he was willing and able to join us. Dregen is a real star and a true rocker at heart. I can’t wait to start rockin’ out with him in the band!”

Continues Dregen, “Sure, I was listening to KISS and Sex Pistols when I was a kid but it was Hanoi Rocks that made me do it! I wanted to be a rockstar but 99.9% of my record collection as a kid was either UK bands or bands from the USA and everything felt so far away and untouchable apart from one band… Hanoi Rocks! If they could make it, I could make it!It’s an honour for me to be in the band together with Michael and Sami Yaffa who were the brightest shining stars when I grew up and started to play Rock N Roll music. And bonus to that is also to share stage with Karl Rockfist and Steve Conte who are incredible players. So. I. Am. A. Happy. Fucking. Dregen!I hope I can bring even more explosivity and energy to the band, as well as, of course, loud guitars, great live performance, killer riffs and songwriting for upcoming studioworks.”

Ginger played his final gig with the Michael Monroe band on June 26th at Kalasatama, Helsinki, Finland. The entire show, filmed by Finnish TV, can be viewed online at areena.yle.fi/video/1308398435774.