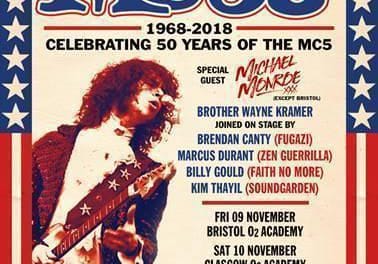 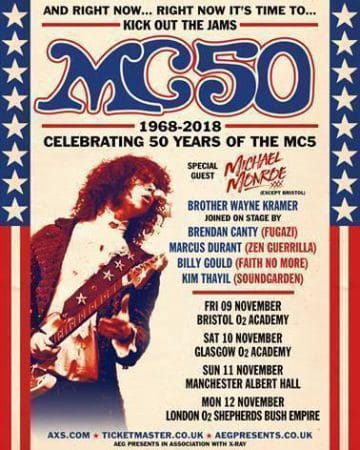 Hanoi Rocks frontman Michael Monroe will be doing a short tour of the UK as the special guest on three of the four dates of the MC50 UK Tour featuring MC5‘s band founder and guitarist Brother Wayne Kramer.

“Finnish glam punk legend Michael Monroe has been announced as special guest for November’s MC50 UK tour. Fresh from playing to a packed Opera House at Blackpool’s Rebellion Festival, Michael is set to bring his high energy rock n’ roll to this incendiary double bill. “MC50 have always been one of my favourite bands of all time and one of the most important bands in the history of Rock’n’Roll. So it’s a great honour and privilege to be part of Mr. Wayne Kramer’s MC 50 tour. It’s gonna be a real blast of energy, that’s for sure!” said Michael. With a brand new album recorded and due for release in 2019, Michael Monroe and his band join the MC50 at the following dates:

In an interview with Sleaze Roxx back in 2015, Monroe spoke about rock n’ roll in general as he stated: “Back in the ’60s and ’70s, bands didn’t think about what genre they were going to be, or how commercial this is and how it’s going to sell. Bands did their own thing and had more personality then. Nobody worried about the money or the business, but the record companies encouraged categorization and putting things in a box and packages by saying “this is grunge” and “this is glam” and “this will sell so many copies to a certain type of people.” That, to me, just kills music. To me, music had no place in the music business for a long time [laughs].

There’s still a lot of good bands around. If you look around you’ll find them, and I’m so glad that bands like Foo Fighters and guys like Slash are as big as they are. They’ve got the right attitude. Slash plays the right kind of guitar, ya know? There should be more bands like them. And I’m not saying that all new bands suck or anything like that, but so many bands have become famous and sold millions of records, and people assume it is because they’re the best bands out there. But ten million fans can be wrong, and usually are.”