Great news for Stryper fans as the group’s chief songwriter and frontman Michael Sweet just announced that he has completed all of the music for the songs for the band’s next studio album. 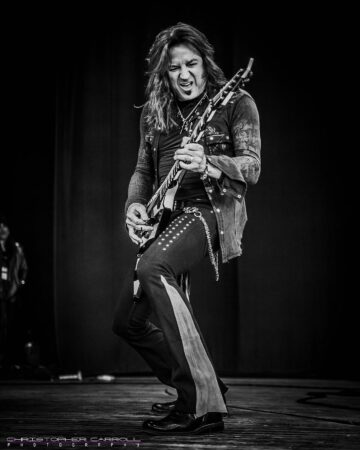 “I’m happy to say that all the songs (music) for the new Stryper album are complete. I started work on everything 2 weeks after my eye surgery (once I could lift my head) so it’s taken a little longer than usual (3 weeks) and also due to the holidays.

Of course we will fine tune them once we get together for rehearsal. Usually we rehearse at my house and then we head to Spirithouse to record. This time around we’ll be rehearsing at Spirithouse and we’ll be working though a few songs at a time and then tracking them once the band learns them. Very different yet most likely very effective.

What do the songs sound like? Killer! Lots of riffs, grooves, up tempo and mid tempo and everything has a great feel to it. I’ve only sent music to the guys so they haven’t heard any melodies yet but the melodies are strong and powerful. It’s always a little strange talking about your own music but I can say that I’m really excited about the direction of this album! I know you will be too

We’ve tuned down to D so the tuning makes it all sound a little fatter and heavier. There are a few songs with the low E string dropped down another step (C) so those songs have a bit more meat and potato’s as well;-)

There are a few ballads but they’re not your typical “piano” or “acoustic” ballads. They’re heavy as well and definitely guitar driven. Even though there have been obstacles along the way, this album really has shaped up to be an amazing piece of work. We’re a long way out but man, I can’t wait for all of you to hear this!! It may very well be our best yet