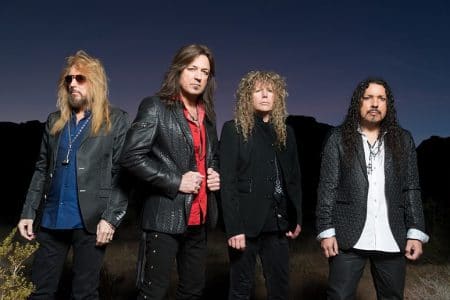 Great news for Stryper fans as the band’s frontman Michael Sweet has just announced that the songs for the Christian rockers’ new studio album have been written and recording will apparently start next week.

“It begins. The album is written and ready to go. 11 songs that will go to 11? The guys come out a week from today. It will be our first album with @perryrichardson777 and I can’t wait for the world to hear his bass and vocal abilities. We are stronger than ever, better than ever and more determined than ever before. @stryper keeps proving the haters and critics wrong year after year. 36 and counting. We were disregarded by the industry long ago yet we keep moving and growing and there are no signs of slowing down. We have the best fans in the world and because of them we can continue to record, tour and thrive in a turbulent music world. To anyone scratching their heads right now saying to themselves “I wish they would just go away” – We’re not going anywhere? Also, this will be our best album yet. Are you ready for The Yellow & Attack in 2020? It’s coming…….”