Stryper frontman Michael Sweet took to Facebook to provide the answer to the question of why the Christian hard rockers seemingly never open for other bands. 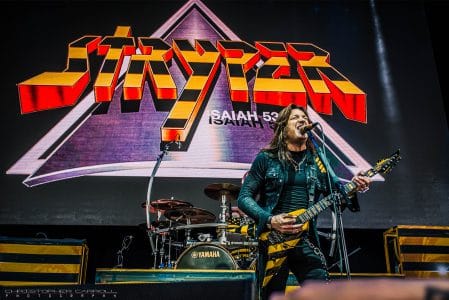 “We’re asked all the time, “why don’t you open for other bands?” – Well, we’ve submitted our name many times over the years to open for bands like Judas Priest, Scorpions, KISS, Van Halen, Megadeth and many others. Quite honestly, I think we’d be a great opener for any of the above. It would be an interesting and exciting show guaranteed. Unfortunately it hasn’t been in the cards so we’ve continued to headline clubs, theaters and casinos around the globe. Just for fun, who would you like to see us open for?”

Another explanation that was not mentioned by Sweet could also be that Stryper are a very good live band and many headliners would be worried to be blown off the stage. Out of 33 bands that played the M-Pre Party, M3 Rock Festival and Sleazy Slimey Sunday 3 over four days last May, Sleaze Roxx ranked Stryper at #7 overall and stated as follows about the group’s performance at the M3 Rock Festival:

“Say what you will about Stryper, this is a band that just keeps getting better with time like a fine wine. Lead vocalist Michael Sweet‘s voice is still phenomenal 30 plus years after the group started. The guitar harmonies between Michael Sweet and Oz Fox were impressive to see and hear. Stryper‘s setlist was definitely a good one with some of their heavier and well known tunes like “More Than A Man” and “The Way”, the easy sing along (“Calling On You”), a couple of new tracks (“Sorry” and “God Damn Evil”) and the concert staples (“Soldiers Under Command” and “To Hell With The Devil”). I know that Stryper have recently come under fire most notably from Metal Sludge for using tracks / pre-recorded vocals while playing live but I did not notice this at the M3 Rock Festival and frankly don’t really care as long as it’s done for enhancement purposes. In any case, there is no denying that Michael Sweet remains one of the premier singers of his generation.”