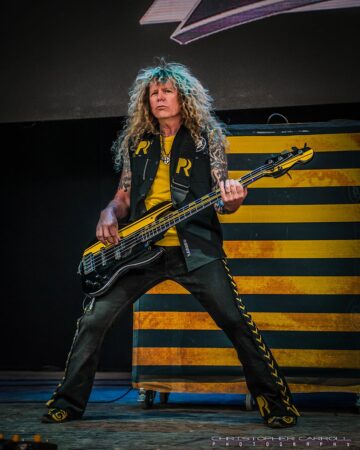 Christian rockers Stryper consisting of frontman Michael Sweet, drummer Robert Sweet, bassist Perry Richardson and temporary replacement guitarist Howie Simon are apparently excited to be playing their first live gigs in almost two years. They are scheduled to play the RockTember Music Festival in Hinckley, Minnesota, USA on September 10, 2021. Singer Michael Sweet decided to send a message via his Facebook account praising both Richardson and Simon. The latter is temporarily replacing long-time guitarist Oz Fox who is recovering for the rest of the year from various medical ailments including brain surgery earlier this year. Simon previously replaced Fox for a handful of gigs back in 2018 as well.

“Just to clear up a few things:

Howie Simon is filling in for Oz for the shows that we have booked this year. He does an absolutely amazing job and obviously so since Winger and Tesla use him as well for their fill in dates. Simple as that. If we didn’t feel comfortable using Howie we wouldn’t. We do and we’re honored to have him.

Also, this band has never sounded better than we do now with @perryrichardson777

People (and I mean very few people) may complain because we don’t have the original lineup but Perry is the cream of the crop. Personally, musically and spiritually. Period. He’s taken this band to new heights and we couldn’t be more proud to have found him and to have him.

We’re about to perform (tonight) having not played live in almost 2 years and with basically no rehearsal. Am I making excuses? Hell no! I’m simply saying that we’re rehearsing as we go and trying to find our groove. We’d be doing the very same thing if Oz was here now.

So, come out and enjoy the shows. We’re just happy and humble to even be able to play is this absolutely insane world. The music business got hit the hardest and continues to take blow after blow. To be able to perform on a stage during the most volatile times of our lives is beyond miraculous. It’s heavenly