Stryper frontman Michael Sweet has released a lyric video for new song “Golden Age” from his upcoming new solo album entitled One Sided War, which will be released via Rat Pak Records on August 26, 2016. 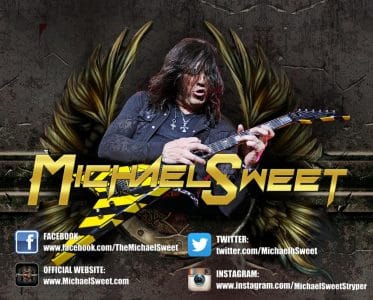 Sleaze Roxx stated the following in its review of One Sided War: “Sweet has surrounded himself with some very talented musicians for One Sided War. He asked guitarist Joel Hoekstra (Whitesnake, Night Ranger), drummer Will Hunt (Evanescence), guitar shred master Ethan Brosh (Burning Heat, solo work), and bassist John O’Boyle (Tom Ingram Band) to help him with his new solo album. What they have crafted is an all killer, no filler album of hard rock, glam rock, and some huge classic metal riffs to satisfy your taste buds if this is what you are hungry for.”

Sleaze Roxx specifically commented on the song “Golden Age” in its review by stating: ““Golden Age” sounds like a train is rolling through your town with the fast paced drums and chugging guitars. It also has some amazing guitar licks and solos from Brosh and Hoekstra. The lyrics are inspired by how powerful God is and what he is capable of. “Only You” finds Sweet singing about how God will love you and forgive you no matter had bad you stumble. This song is close to my heart as I have been dealing with my own personal struggles and demons, and this song has helped lift my spirits in a more positive way. It has shown me that there is light at the end of this dark tunnel I am traveling through. So, I want to take this time to thank Michael Sweet for writing this song.”