The world will now get the chance to partake in Stryper frontman Michael Sweet‘s Annual Christmas Show as the fifth edition will be available for viewing via live stream through VenueNet on December 19, 2020. 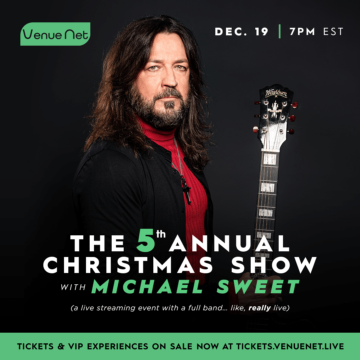 “Rock sensation and Stryper founder and frontman’s Michael Sweet announces his 5th annual Christmas concert with a new partnership with VenueNet (tickets.venuenet.live), a brand new premier social platform for concert live streaming.  This fully interactive concert experience brings the spirit of Christmas and the music you love right to your laptop or mobile device. Michael’s Christmas show has been a success for years in the Massachusetts area but now fans across the globe will have an opportunity like never before to be a part of this yearly celebration. Featuring original music and Christmas classics (with a twist) this once in a lifetime experience is an opportunity for fans to see Michael like never before as he streams directly from the newly opened state of the art Bank Of New Hampshire Stage in Concord, NH.

When you’ve fronted one of the most trailblazing groups of the MTV generation, written a stable of Billboard charting singles, filled arenas all the world over, said goodbye at the peak of it all, took stock in a thriving solo career, got the band back together for yet another record breaking run and even took a stint co-leading one of the most legendary classic rock acts ever, then you undoubtedly have a story to share. But there’s still much more to Michael Sweet than selling over eight million albums in Stryper or singing and guitar slinging for Boston, including an equally riveting behind the scenes story packed to the brim with triumph, heartbreak and redemption.  Musically speaking, Sweet is coming off yet another creative high in the Stryper camp thanks to their return to form record No More Hell To Pay. Besides making an instantaneous Top 40 debut on the Billboard 200, it landed at #2 on the Top Christian Albums charts, #3 on Top Hard Rock Albums and #6 on Top Rock Albums. It’s certainly a testament to the band’s perseverance, whetting the public’s appetite all the more for solo music from Sweet.

Built on nearly indestructible streaming technology that can offer service to any scale of audience, VenueNet is a one-stop platform for users to buy tickets to, and view, live concerts both in real time and as VOD replays as well as a catalyst for artists to promote their performances, sell tickets and connect with fans directly. VenueNet is the home base for a number of ground-breaking artist/fan experiences. Ranging from a basic one-to-many live broadcast to fully interactive fan experiences, VenueNet is a place for users to achieve accessibility like never before and see their favorite artists as they should be seen.

Michael Sweet performing “Always There For You” live at Christmas Show on December 14, 2017: