Weikath was asked whether he looks more favourably now at Helloween‘s controversial and rather commercial album Chameleon, which was the last studio album to feature frontman Michael Kiske and released back in 1993. Weikath replied: “I even looked at a favourable back then it was just I thought it could have been even better. I mean Chameleon could have been better with a 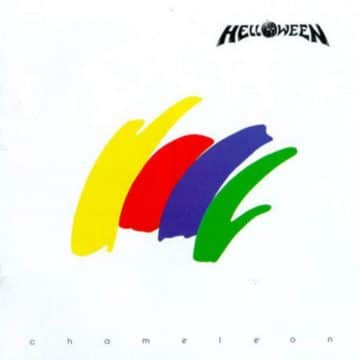 different approach but it was the result of what was there at the time  and the intentions we had with it. We were lambasted with debt of the amount of two million Deutschmarks, we were just trying to get rid of that somehow and we thought if we if we make the album commercial it would work.”

In an interview with Sleaze Roxx back in January 2016, ex-Helloween and current Masterplan guitarist Roland Grapow provided some insight into the album as he stated:

In terms of the writing for the new album which will include Kiske and guitarist Kai Hansen, and whether it will be a continuation of Helloween‘s last studio record My God-Given Right, Weikath indicated (with slight edits):

“My God-Given Right was done quite a different way. We had 25 tracks and the producer picked the ones that he thought were the most worthwhile and bam, you had that album ready. We just recorded all the ready-made demos. This time on the new album, we have a lot more fragments and eventually there’s going to be some great stuff I just know. It’s going to be a lot of work. It’s going to take some time but that’s probably a great approach if we’re all not too old for it or if we’re not too uncool for it. We have Charlie Bauerfeind and Dennis Ward as a producer a team on this album so as there’s got to be something great coming out of it. Dennis Ward knows Unisonic and the way the band worked. Dennis been part of the band himself and he knows how to arrange things and record things and and come up with great results under the most difficult circumstances and Charlie Bauerfeind is like the main organizer. I wrote three complete tracks, Sascha Gerstner came up with a few things, Markus Grosskopf finished a few tracks. Kai Hansen and Andi Deris are working on some fragments and when we put it all together, we get creative and so that’s the way we’re gonna do it. In terms of musical direction, we are not going to do something unexpected. We are going to play it safe in the future.”

You can read other excerpts from the interview with Michael Weikath at The Metal Voice‘s website or listen to the interview below: