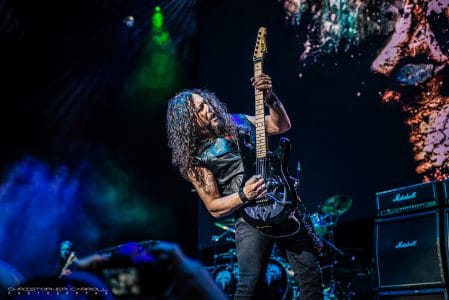 Queensrÿche guitarist Michael Wilton was recently interviewed by Yiannis Dolas for Greece’s Rock Pages. Wilton along with bassist Eddie Jackson are the only remaining original members left in Queensrÿche with the departures of guitarist Chris DeGarmo (1980 to 1998, 2003 and 2007) and lead vocalist Geoff Tate (1981 to 2012), and drummer Scott Rockenfeld being on hiatus for the last couple of years.

In terms of whether the Queensrÿche band members operate as a democracy or whether the final decision lies with the two remaining original members, Wilton indicated (with slight edits): “I think when it comes to the creative aspect of the band, it’s a band decision. Everybody is involved, everybody has the opportunity to put their input, to put their creativity and their opinion into the song writing and into aspects of marketing; the album cover design, t-shirts, whatever… that’s definitely a band democracy. The business side, that nobody wants to know about, it’s a different scenario.”

In terms of Queensrÿche‘s most underrated album, Wilton opined: “Wow! Ahm… I would have to say “Promised Land”. When in came out, it had those great expectations because it was coming off “Empire” and we kind of did a 180 on it as far as we didn’t try to appease the popular stereotype out there. So, there is a lot of great songs on that album and great musical passages and I think a lot of them got pushed and shadowed due to the onslaught of the “Empire” album.”