Queensrÿche guitarist Michael Wilton was recently interviewed by Daily Boom and spoke about how the band’s drumming situation with the release of their latest studio album The Verdict. 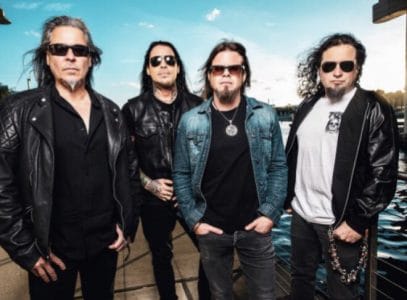 In terms of original drummer Scott Rockenfield returning to the band, Wilton advised: “We don’t know. He is on a different path right now and raising a child so we’ll wait and see. The door is always open. People change and they want to do different things so they need some time and their privacy. Casey Grillo has been on tour with us for the last two years and he actually played drums on two of the extra songs included on our bonus cd. We did acoustic versions of “I Dream in Infrared” and “Open Road” and he did all of the percussion on both those. He’s a great drummer, really well-rounded and he has a wide palette in his musical style. He’s filling big shoes and he’s doing a great job. The fans really love him and he is scheduled to be on the road with us again this year.”

With respect to how The Verdict came together differently from past albums, Wilton indicated in part: “Making things more challenging was the fact that Scott (Rockenfield) couldn’t play on this album so we had to get a drummer. Todd LaTorre had to get the rust off his drumsticks and he had to write the album on the drums as well as the lyrics. You can imagine the organizational nightmare (laughing) but you know, we believed in it. Zeus was the guy kind of orchestrating everything and we had to get a midi drum kit into the studio so Todd could play along and learn or write the parts. It was just mind-blowing but during this whole process, the ideas and energy were fantastic. It was all of us at the top of our game just devoting so much of our own creative elements to this album. You don’t realize until after you’re done that these songs are turning into monsters. We’re just so proud of them.”

You can read the rest of the interview with Michael Wilton at Daily Boom.