In terms of whether there is anything that he regrets in the last 50 years, Box indicated (as transcribed by Rock Pages with slight edits): “I think the only regrets that I have is that we lost a people along the way through drugs and drink. And that’s very sad. If the management had paid more attention to the well-being of the artist, rather the well-being of the money, I think we 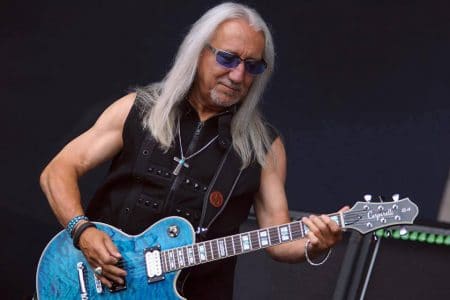 would have probably some of those people with us today. Because, we work so hard you know. Two albums a year is a tough call. Nine months on the road is a tough call. You do that for five years and people are going to weaken and need to take something to get through. And I think that’s where we were wrong really.”

With respect to former Uriah Help drummer Lee Kerslake receiving golden discs from Ozzy Osbourne for his work on the albums Blizzard of Ozz (1980) and Diary of A Madman (1981) after all those years, Box stated: “I thought it was fantastic. It would have been even nicer if they had followed it with a check, but never mind. It wouldn’t have hurt them to do that, it’s a shame really. I talk to Lee all the time. He is in a space now where he’s done that, he got those albums, the recognitions that he wants. He says he’d put them on his bedroom wall so he looks at them when he goes to sleep and he can look at them in the morning when he wakes up. If he is happy with that it’s fine. But, in all fairness, it wouldn’t have hurt them if they had paid him some money. Money that’s owed to him.”

Wikipedia states the following about the history of Uriah Heep‘s band members (with slight edits):

“Uriah Heep are an English rock band from London. Formed in late 1969, the group originally featured vocalist David Byron, guitarist and backing vocalist Mick Box, keyboardist, guitarist and vocalist Ken Hensley, bassist Paul Newton, and drummer Alex Napier. Nigel Olsson replaced Napier in early 1970, with both drummers contributing to the band’s debut album …Very ‘Eavy …Very ‘Umble. Olsson was replaced by Keith Baker and later Ian Clarke, before Lee Kerslake joined as the group’s first long-term drummer in late 1971, when Mark Clarke also replaced Newton. Clarke was later replaced by Gary Thain, who first appeared on 1972’s Demons and Wizards. Thain was fired from the band in early 1975 due to an “increasing drug problem”, which eventually led to his death on December 8th that year; he was replaced by John Wetton.

Byron was fired from Uriah Heep in 1976 due to his growing alcohol abuse, which eventually led to his death in 1985. He was replaced by John Lawton, as bassist Trevor Bolder also joined during the same period, following Wetton‘s departure. After tensions arose between Lawton and Hensley, the vocalist left and was replaced by John Sloman, while Kerslake was replaced by Chris Slade shortly after his arrival. Due to disagreements with the addition of Sloman and the band’s musical direction, Hensley left the band in 1980 and was briefly replaced by Gregg Dechert. By April 1981, only Box remained in Uriah Heep, rebuilding the band with the addition of bassist Bob Daisley, returning drummer Kerslake (both recently departed from Ozzy Osbourne‘s band), keyboardist John Sinclair and new vocalist Peter Goalby (recently of Trapeze).

After the release of Abominog and Head First, Bolder returned to Uriah Heep in 1983. Goalby and Sinclair left in 1986, with Steff Fontaine briefly taking over on vocals before Bernie Shaw was brought in a few months later. Uriah Heep‘s line-up remained stable until January 2007, when Kerslake was forced to leave the band due to “ongoing health problems”. He was replaced by Russell Gilbrook in March. On May 12, 2013, Bolder died of cancer. He was later replaced by Davey Rimmer.”

You can listen to the interview with Mick Box below: