Mick Cripps and Kelly Nickels asked to be part of Lewis / Guns’ L.A. Guns reunion but both declined

L.A. Guns frontman Phil Lewis was recently interviewed by the White Line Fever podcast and spoke about the various line-up changes that the band has undergone since he rejoined forces with guitarist Tracii Guns. As has been well documented, guitarist Michael Grant left or was fired from the group in March 2018 depending on who you ask. Grant was replaced by Johnny Monaco who lasted a couple of months before being replaced by Adam Hamilton. 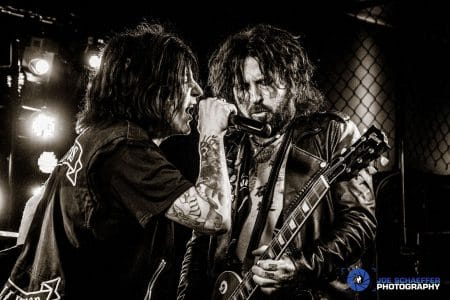 Lewis also addressed getting the classic L.A. Guns line-up back together, which would include guitarist Mick Cripps and bassist Kelly Nickels. Lewis, Guns, Cripps, Nickels along with drummer Steve Riley played in L.A. Guns together from 1987 to 1995 and again in 1999 and 2000.

“Of course – but there are situations, you know, that are beyond our control. If something comes up and somebody can’t stay and they’ve got to move on, you’ve got to replace them.”

“I think a lot of of people are curious why we didn’t get Mick (Cripps) and Kelly (Nickels) back in the reunion, the originally bass player and guitar player. The fact is that we asked them and they either didn’t want to or they couldn’t. Mick couldn’t because he’s got family, he’s got the whole business and everything.”

“And Kelly didn’t want to so we just sort of forged ahead with the players that we had.”

You can listen to the interview with Phil Lewis at White Line Fever podcast.