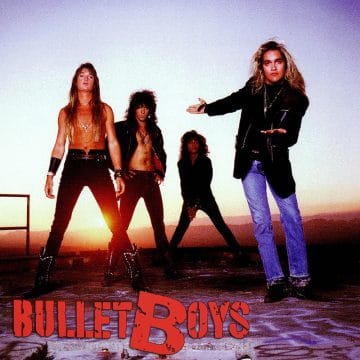 Lies, Deceit & Treachery and former BulletBoys lead guitarist Mick Sweda was interviewed by Ruben Mosqueda for Sleaze Roxx on August 28, 2019 and the interview will likely be published today or tomorrow.

Sweda reminisced on some of the producers that were considered for the BulletBoys‘ self-titled debut album, which was released back in September 1988.

Sweda recalled: “When it came time to look at producers for the debut album, Ted Templeman came up. If you recall around that time, he had produced Aerosmith’s Done With Mirrors. Aerosmith is one of my all-time favorite bands, but that record was so ‘lifeless’ and ‘flat.’ It was devastating to me, because that was not the Aerosmith that I remembered. I associated that album with his production. At that point, he was not on any list of mine! I had Brendan O’Brien on my list along with a host of others. We even had a meeting with Bob Ezrin, so we sit down to get to know each other and the first thing that he says, “BulletBoys. Bu-bu-bu BulletBoys. We’re going to have to change that name!” The meeting ended three minutes later [laughs]!”

Stay tuned for the interview with Mick Sweda by Ruben Mosqueda on Sleaze Roxx!

BulletBoys‘ “Smooth Up In Ya” video:

Bulletboys Smooth Up In Ya