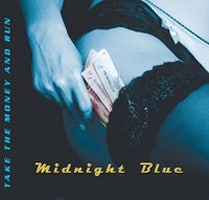 Midnight Blue’s one and only album ‘Take The Money And Run’ saw a Japanese release in 1994 on Zero Records and now gets a release for the first time in Europe on Yesterrock on Febraury 3rd. The re-release this gem includes new cover artwork, a remastered sound and two previously unreleased bonus tracks called “Hurts When We Do It” and “Only Girl” and is available for purchase at www.yesterrock-shop.com.

Lead singer Doogie White today says about this band, “Midnight Blue were a great rock band and it took my career up a level from LA PAZ mainly because we were based in London and we had access to everyone who needed to see us on a regular basis. It was a shame that we didn’t get the big deal but hey, that’s rock ‘n’ roll, and if we had I would have missed out on all the other great opportunities that have come my way. Things happen for a reason…maybe!”

This stellar melodic rock record is regarded as one of the finest releases of this genre by an UK artist from the 90’s and will please every fan of bands such as FM, Heartland, Praying Mantis or Tobruk. Highlights on ‘Take The Money And Run’ include the opener “I Surrender”, a fast rock tune with a catchy chorus, the keyboard driven songs “Call Me” and “Hands Of A Lover”, the funky, groovy title track and the ballads “Remember” and “One Way To Heaven”.