Midnite City lead vocalist Rob Wylde has provided his review of two KISS End of The Road World Tour concerts that took place in Birmingham, UK on July 9, 2019 and Manchester, UK on July 12, 2019. 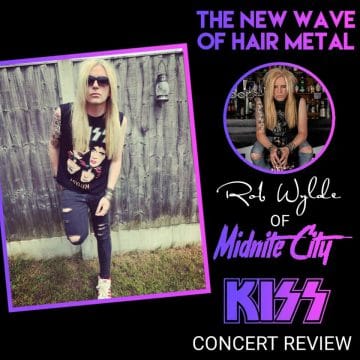 The following message was posted on The New Wave of Hair Metal‘s Facebook page yesterday (with slight edits):

Midnite City frontman, Rob Wylde is a HUGE fan of KISS. He went to two of the shows on their End Of The Road tour. Since I’m a huge fan of both KISS and Midnite City (he and I both adore the Crazy Nights album), I asked Rob if he would give us all a review of the shows he attended. I’ll let Rob take over from here:

“So last week I was lucky enough to go and see 2 final KISS shows on their current End Of The Road tour in Birmingham and Manchester.

I discovered KISS as a 10 year old kid in 1987 on the ‘Crazy Nights‘ album and instantly fell head over heels in love with them, having no clue of the prior history/ make up years of the band. After discovering that I was a huge KISS fan, an older neighbour friend of mine told me that I needed to listen to some ‘proper’ KISS and loaned me his Alive 2 vinyl. When I opened up that gate-fold sleeve, just like a million other kids before me around the world, I just lost my friggin’ mind! From that point onwards for every birthday and Christmas I would ask my parents for a different KISS cassette from their 13 year back catalogue until I owned them all. From Destroyer to Unmasked, Rock N’ Roll Over to Dynasty, I loved them all! And that’s not forgetting 80’s KISS which I loved just as much.

In 2014, as a member of Tigertailz, I was lucky enough to play with KISS on KISS CRUISE 4 out in the USA. As well as playing 2 Tigertailz shows on the ship we also took part in the sail away show and covered ‘A Million To One’ from the Lick It Up album and ‘I’ from The Elder. (If you search for it you can find footage of us playing those songs on YouTube).

Tigertailz performing cover of KISS‘ “I” at the KISS Kruise 4:

Cruising around the Bahamas certainly did not suck and finally getting to meet and chat with KISS was the icing on the cake. They were just awesome to us!

KISS has also been a massive influence when it comes to my songwriting and most recently with my Hair Metal band Midnite City. If you listen closely to both our self titled 2017 debut album and 2018’s follow up ‘There Goes The Neighbourhood‘, alongside obvious Def Leppard and Danger Danger influences, there is a huge slap of KISS in there and always will be, so seeing them 2 final times last week was both exhilarating and heartbreaking at the same time. Kinda like saying goodbye to a beloved family member I guess.

For the Birmingham show, I had standing a ticket so got front row and stood through ‘the painter’ who was nowhere near as bad as I thought he’d be and was pretty incredible if I’m honest.

At 9pm, the house lights went down and the rumble that introduces every KISS show began. KISS are the only band that I officially lose my mind to. It was that way when I saw them for the first time in 1992 and nothing has changed since. I instantly revert to being a 10 year old kid and all my ‘too cool for school’ bravado goes right out of the window for one night. Opening with ‘Detroit Rock City’ and for 2 solid hours I witnessed the best stage show I have ever seen in my life (and I’ve seen A LOT). From ‘Shout It Out Loud’ to ‘Lick It Up’ to ‘Psycho Circus’ all eras of KISS was covered. The only slight disappointment was the non 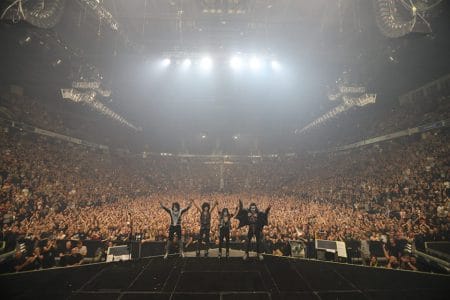 appearance of ‘Hide Your Heart’ which had been played early on during the U.S tour. But they more than made up for it with ‘Crazy Crazy Nights’ which was only added to the set in the UK/ Europe. Gene spat blood and breathed fire, Paul flew over the audience and everything you’d expect from a KISS show was right there.

After a kick ass version of ‘I Was Made For Loving You’, KISS ended their set with ‘Black Diamond’ before returning to the stage for an emotional encore of ‘Beth’ which was performed around a piano which Eric played (or pretended to). The band then ended their 20 song set with ‘Rock N’ Roll All Nite’ which featured more pyro than I have ever seen in my entire life. This made Motley Crue‘s final tour look feeble in comparison.

A lot has been said about Paul using backing tracks for this tour and there is no denying that tapes were used for sure, but honestly, who gives a shit? The guy is nearly 70 and has been singing in the stratosphere for 45 years so give the guy a break. He still has more energy and puts on a better show at nearly 70 then most guys in their mid 20’s do. The guy is incredible, simple as that and if he needs some help here and there then I am totally fine with it. Joe Elliott is also using some tracks nowadays and is a good 10 years younger than Paul and at the end of the day what would you rather hear, a guy with no tracks sounding like he is literally dying onstage like Jon Bon Jovi and Vince Neil recently or someone getting a bit of help so that the songs sound as you remember them? Simply put,if you don’t like, don’t go to the show!

Following Birmingham, I saw KISS again in Manchester a few days later and although the set list and show was exactly the same, this time I had seated tickets for the first time ever and got to witness the full stage show from a distance in all it’s bombastic glory!

It was so hard to say goodbye to something that has meant so much to me for so long, and although I definitely agree that’s it’s time to hang the gloves up, the world will certainly be a much duller place without them.

Not only does this end the 45 year history of the greatest Rock N’ Roll band of all time but it also signals the end of the big ‘Arena Rock Show’ as we have known it. No-one CAN and WILL replace KISS and that’s a FACT.

From being bullied at school for listening to KISS, to having all my dreams come true on KISS Kruise 4, KISS have been with me every step of my life and they will never know just how much they have meant to me alongside billions of others around the world.