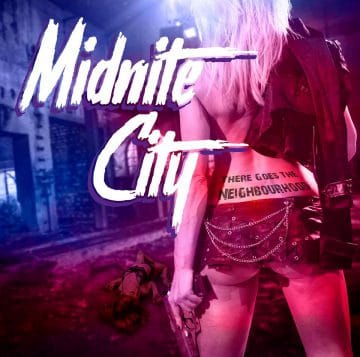 sophomore album There Goes The Neighbourhood, which was released on October 19, 2018.

In an interview with The Rockpit in October 2018, Wylde stated the following about the track “Here Comes The Party” and whether it was one of the first ones recorded: “No ‘Here Comes The Party’ was actually one of the later tracks that I wrote for the album but as soon as I had, I knew that it had to be the opening song on the album. I remember years ago Paul Stanley saying that the first track on any KISS album was really important as it kinda set the stall out as to what was going to come and just as ‘We Belong’ set the tone for the first album, ‘Here Comes The Party’ does the same with this album. It has an anthem type of vibe about it and alongside, ‘Gave Up Giving Up’ and ‘Takes One To Know One’, is one of the heavier, more attitude driven songs on the album. It’s  a Glam anthem for 2018 and it starts the album off with a real kick in the teeth! ‘Here Comes The Party’ is also going to be the third single and we will be shooting a video for it next month with a view to releasing it before Christmas.”

In terms of how much that Def Leppard have influenced him, Wylde opined: “A huge influence! I mean no-one really does it better than Def Leppard do they? My favourite album of all time is ‘Hysteria’ but I love everything they’ve done. They are just the kings of Pop melody mixed with Rock N’ Roll and that’s pretty much been the blueprint for everything I’ve ever done. When you’ve listened to a band so much, it’s impossible for some of that to not come out in your music and like I said earlier, we make no denial about who’s influenced us. Even if we were to deny it, it’s pretty obvious to everyone else anyway…”