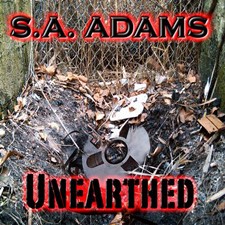 EMA-Polydisc has acquired the rights to release all past and future recordings of S.A. Adams; debuting with “Unearthed” — the never-before-released 1986 recordings by Adams and Dream Theater/Avenged Sevenfold’s Mike Portnoy — recorded between December 28, 1985 and January 11, 1986 at Mike Portnoy’s Long Beach apartment. Citing the influence of bands such as MOTORHEAD, EXCITER, RAVEN, early MEGADETH, VENOM and TANK, Adams, in an early 2006 press release warns “The material on “Unearthed” is definitely NOT progressive rock/prog-stuff — it’s serious sledgehammer-in-the-balls metal. No odd and changing time signatures for anyone here.” Originally scheduled for release that spring of 2006, “Unearthed” had to find another “home” due to the original release label’s bankruptcy.

The “Unearthed” sessions were intended to supplement Adams and Portnoy’s June 30th, 1985 recording a nine song demo/cassette album financed by Kick Ass Monthly journalist Bob Muldowney, who tapped Adams to produce a catalog of music Muldowney was to sing his own penned lyrics over. Aside from including lyrical content that even managed to offend other underground metal fanzines, the recording generated a contract offer from Combat Record’s “Boot Camp” Series. “Wanting to make sure we could fulfill the content obligations, a plan was implemented to stockpile as much music as possible; which Mike and I accomplished that winter. However, once I saw the enslavement papers, I mean, contract, the project got put aside.” A few weeks later, Portnoy informed Adams that he’d be putting all his energy into his new band MAJESTY, leaving Adams to dabble with these multi-track masters throughout the late ’80s and begin the solo career he still enjoys today.

EMA-Polydisc has issued “Unearthed” digitally with availability on iTunes, AmazonMP3, Loud Trax and other DRM-free outlets.

FnA Records — fnarecords.net — has issued the standard CD, and a limited edition version which comes with a 4×6 autographed by both Mike Portnoy and S.A. Adams.