Former White Lion frontman Mike Tramp was recently interviewed by Andrew DiCecco for Vinyl Writer Music. Tramp was promoting his new “best of” album Everything Is Alright, which was just released via Target Records on May 21, 2021.

In terms of getting to meet Van Halen frontman David Lee Roth before coming over from Europe to the United States of America, Tramp recalled:

“I met Van Halen in ’81 in Spain because we were at the same record company, and I had the opportunity to sort of be “the guy” for the band for the three days they were in Madrid. It was an exceptional experience because no one really knew they were there; this was just a big Warner Bros. world promotion tour for Fair Warning. So, I got really, really close to the band, and they really let me into their little world. I observed all these different things, both as a fan and as a student. One thing was, I thought that when I would present my record to David Lee Roth, he’d say, “You’re gonna be our next support band in America.” Instead, he says, “Man, you gotta get over there and play the clubs for the next ten years.”

The following year, ’82, I went over there with Mabel. We were now called Lion and ended up playing about 10-12 shows in the New York area. The final show we played was at L’Amour, where we were playing before Vito’s band Dreamer, which was basically just a tribute band playing Van Halen, AC/DC, Iron Maiden, etc. I met Vito in the dressing room – it wasn’t like we exchanged any words – but I sat there and watched him play his guitar through one of our little rehearsal amps, and I just realized that that’s the level I needed to be with. I thought that we came over to America with our chops, and suddenly, I just saw someone who was actually my age and had the hair, had the guitar, all the shit. November ’82, we went back to Denmark, and the guys were just tired. We had no 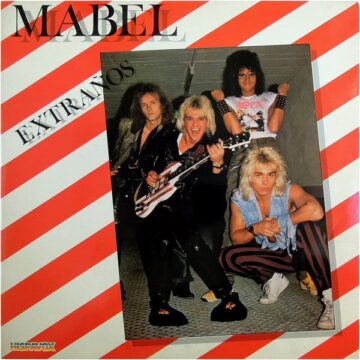 money, but my fuse had just been lit. So, it only took about two and a half months before I got a little bit of money together with the help of my mom and bought a one-way ticket to New York. About a couple of days, after I’ve been there, I run into this girl who gives me a phone number and says, “This is the guy you need to call.” And it was Vito.

We got on the phone with each other, and he remembered me. We bullshitted each other for a couple of hours and got together a couple of days later. Then we started the early beginnings of what White Lion would eventually end up, with the bass player and the drummer from Vito’s band. Bit by bit, they, as many other people I’ve played with, ran out of steam. But Vito and I felt like we had a commitment here, and Vito opened the door to George and Michael [Parente], who owned L’Amour. They remembered seeing me too and also thought that something should happen there. We started looking for members and went through a few changes until we finally became White Lion in early ’86, with James [LoMenzo] joining the band as the last member.”

You can read the rest of the interview with Mike Tramp at Vinyl Writer Music‘s website.