Former White Lion lead vocalist Mike Tramp was recently interviewed by Mitch Lafon for the Rock Talk with Mitch Lafon podcast. Tramp has a new solo album titled Second Time Around that will be coming out via Mighty Music in May 2020. 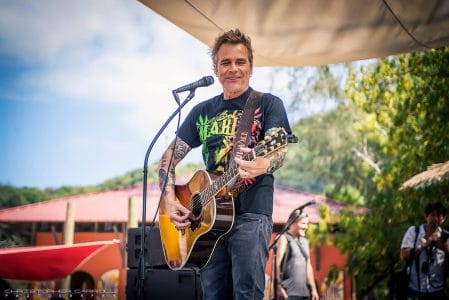 In terms of the songs that he now sings, Tramp indicated (as transcribed by Rock Talk with Mitch Lafon): “I only will sing the songs that I can sing and I will not attempt even for a second to be Mike Tramp 1988 — 27 years old. There are a lot of old rock n’ roll singers trying to hold on to their hair and trying to squeeze out 10% of the voice they once had. It hurts me watching my heroes trying to walk out on stage as Fat Elvis — not giving their best anymore because they simply cannot let go of what they once were. When you’re not good enough anymore you leave the field or become a car salesman. I can’t be Mike Tramp 1988 and there are a lot of singers from 1980’s who simply cannot do what they are trying to attempt.”

With respect to his upcoming new solo album Second Time Around, Tramp stated: “Compared to Lord of The Rings or Game of Thrones, you can actually go in and out of my solo albums and not be confused in where the hell you are. This one basically re-introduces some songs that I wrote and recorded in different versions earlier on when I floating around this break I had in the middle where I attempted… wrongly attempted… a regrettable attempt to do a new version of White Lion. There were times when I stepped into the studio because I felt I had these songs. So, some of these songs are from early on – written at a different time, but anytime that I listen to anything – it is as current as Stray From The Flock, Nomad, Maybe Tomorrow or even Capricorn… It’s still the same story.”

You can listen to the interview with Mike Tramp by Rock Talk with Mitch Lafon below: