Former White Lion frontman Mike Tramp was recently interviewed by Hall Laurel for her book Soundtrack of Our Youth: History of Hair Metal Music, which was recently released and is available in Kindle and paperback formats.

Tramp was asked whether Van Halen III is still the worst album he’s ever heard to which he replied: “Holy shit are you tapping my phone? Not just the worst VH album, but up there with Gene Simmons‘ Kiss My Ass album, as albums that should never have been made.” 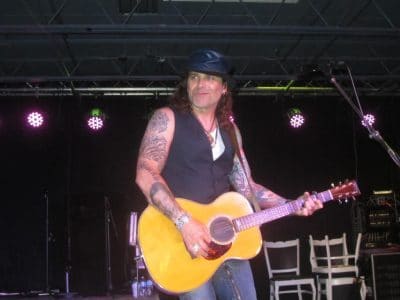 Van Halen III was released in 1997 with Extreme frontman Gary Cherone handling lead vocals. Perhaps Tramp was referring to Gene Simmons‘ 2004 album Asshole or perhaps Tramp was referring to the tribute album Kiss My Ass: Classic Kiss Regrooved that was released in 1994 and featured artists such as Garth Brooks, Anthrax, Lenny Kravitz and Toad The Wet Sprocket interpreting KISS songs written or co-written by Simmons.

The singer also had some choice words about other artists and/or bands.

In terms of Guns N’ Roses frontman Axl Rose joining forces with AC/DC, Tramp opined: “Here comes yet another mess of identifying or calling the beast by its proper name. We AC/DC fans know who AC/DC is, and there was no AC/DC once Malcolm Young, and later Brian Johnson and you can add Phil Rudd was gone. Now if you just went ahead and called it Angus Young & friends featuring Axl Rose, there would be very little crying or complaining. But this thing you mention makes no sense at all, especially because it sounds serious and not a side project done for fun. I like Axl and I like Angus, but I don’t buy this, not at all.”

With respect to the Ronnie James Dio Hologram Tour, Tramp opined: “The Ronnie James Dio Hologram, give me a fucking break. Did anyone ask Ronnie, did Wendy Dio ask Ronnie before he left us if it was OK to go out and do this? I don’t give a rat’s ass about how technical they can get or what they’re saying they doing it for. It is wrong in every way and only something they do to make money from. Don’t tarnish the great memories of the greatest rock singer of all time. He made some of the best rock albums ever with, Rainbow, Sabbath and Dio.”