Ex-White Lion frontman Mike Tramp recently posted the following Facebook message as the end of his 2015 tour is nearing: 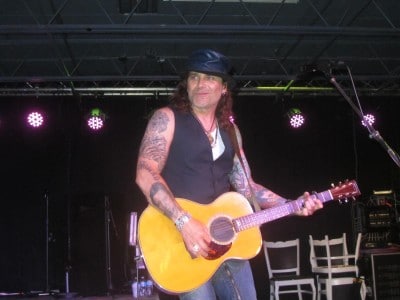 “And so we come down to the final Tramp show of 2015, at the “Nya Trolls Bar” in Malmö, Sweden. I would be lying if I didn’t say that by now I am mentally burned out, and serious need a very long break from the White Lion songs, OMG. At the same time looking at a new approach to the solo live set/show for 2016, as it is important that i don’t play on routine but the enjoyment of playing my songs.

Still looking forward to be back in Sweden tonight.

“What became obvious early on — and it had been advertised as such — was that Tramp was going to regale the audience with some fun war stories from the past. I won’t bother repeating most of what Tramp had to say to the crowd since I assume that his stories stay the same for most of his gigs on this tour but suffice to say that it was a lot of fun hearing what he had to say. The one story that I will share was the one that struck me the most and which seemed to have altered the course of White Lion going forward and certainly impacted Tramp as a performer and person. Hopefully, I’ll do justice to Tramp‘s story as I will likely botch some of the facts since this is based strictly from what I remember hearing. At the height of White Lion‘s success, Tramp had a dream one night where he was a grandfather with his grandkids asking him to play the music that he had done with White Lion. Tramp was embarrassed about what he was singing about in those songs and from that point on, he decided to stop singing about the usual hair band topics such as partying and women, and focus on more serious topics. 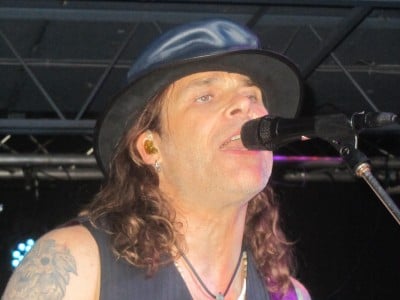 It felt weird hearing all of the White Lion tracks being played acoustically. I think that some worked better than others. Two of White Lion‘s most popular tracks, “Wait” and “Radar Love”, were fun to hear acoustically but paled in comparison to the original White Lion versions of those songs. Just before the guitar solo portion of “Wait” and while still playing that song, Tramp even warned the audience that he could not replicate the solo from White Lion‘s guitarist Vito Bratta so we just had to imagine it or something like that!”

Shortly after the Sleaze Roxx concert review was published, Tramp agreed to be interviewed by Sleaze Roxx but regrettably declined to go through with the interview once he received the interview questions and Sleaze Roxx’s review of his latest album Nomad was published, which stated in part: “My favorite tracks are definitely the harder rocking tunes — and that is a stretch to call them that — such as the opening track “Give It All You Got” which is pretty upbeat compared to some of the other tracks, “Wait Till Forever” which could have been a lot heavier but still works, and “Who Can You Believe.” A couple of tracks that I could live without are the two last ones, “Live To Tell” which I find lacks a good melody and “Moving On” which is simply too slow for my hard rock taste. What sets Nomad apart is simply Tramp‘s voice. If you like Tramp‘s voice and acoustic gigs, you will most likely like Nomad. In fact, I think that most of the songs on Nomad would fit well alongside the acoustic or slowed down versions of the White Lion classics that Tramp has been playing live and that is really a compliment and a testament to the quality of the songs on Nomad that they match up in that regard.”