The Northern Ireland based sleaze rockers, Million Dollar Reload, have called it quits and rebranded themselves as Blackwater Conspiracy.

Million Dollar Reload released two studio albums, 2007’s Anthems Of A Degeneration and 2012’s A Sinner’s Saint as well as a subsequent live album As Real As It Gets. A Sinner’s Saint landed the top slot in Sleaze Roxx’s Top Albums of 2012. Back in August 2012, Sleaze Roxx stated the following in its review of A Sinner’s Saint: “This disc has an unbridled energy that more established acts haven’t been able to capture in decades. If there has to be a poster child for ‘the face of hard rock’ there is no one more worthy at this point in time than Million Dollar Reload. This disc is a strong — a very strong — contender for album of the year!”

A change in musical direction seems to be the group’s main cited reason for reinventing itself as Blackwater Conspiracy.

In a recent exclusive interview with Planet Mosh, Million Dollar Reload frontman Phil Conalane stated: “We’ve been trying to end M$R for a while now so it’s fair to say that the 15th of August is the last ever M$R show…..it will draw a line under it all… and that will be that. But, at the same time, it’s not the end of us collectively making music together that’s for damn sure! I’d say we considered breaking up completely… for about two seconds… [then] laughed really hard at that option and pondered how we would end M$R and move forward.” 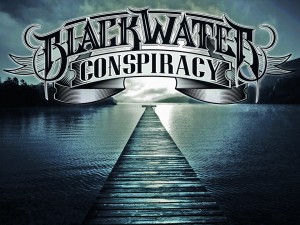 Conalane also indicated “M$R has always tried to evolve as we went along; we never wanted to be one of those bands that would stick rigidly to a formula or style when it came to writing and recording. Every time we would work on new material, or someone would bring in a song, the dynamic would change slightly. It was difficult for that to be very evident because we were only two albums into our career, but as people would be influenced by different types of music and experiences, it would show in the song writing and different elements that aren’t really heard on the first two albums started to emerge. It got to the point that we felt it wasn’t right to keep going with M$R. Things had changed: we had a new line up and the band had grew so much that it would be a struggle for people to really fully embrace what we are doing, putting it up against the style and sound of the first two albums. From what we started out as to where we have ended up at this point doesn’t even resemble anything M$R was in the beginning.”

There is a sense that Million Dollar Reload have not fully explained what happened as Conalane further stated: “Like I say, it’s hard to really explain exactly what is going on without giving it all away. It’s been three years since our last album came out, and in that time the band has went through quite a lot of change and upheaval. It got to the point that everything we were doing was not necessarily in keeping with the ethos and aspirations that we had in Million $ Reload at the beginning. Everybody’s mindset has changed, and changed for the better, and over this past year or so we had to start making decisions about what we were going to do. When a band breaks up, or changes its name, or moves in a different direction, it can be hard for people to accept. It’s a bit like if a band changes its lead singer – you tend to get the ‘Bon Scott or Brian Johnson era’ argument. That kind of ‘before or after’ scenario is something we didn’t want to get into. There will be difficulties in winning over new fans , but that’s just the way it goes. We hope that some, if not most of M$R’s fans, will come along with us (let’s be honest we are only talking a few thousand fans , not millions!)”

Conalane refused to blame Million Dollar Reload‘s newest band members for the change in direction and ultimately demise of the band: “The personnel change really had no influence on the direction change whatsoever. I’m pleased with the line up change: Kev (Brennan – keyboards) and Fionn (O Haigan – drums) are great guys, exceptional musicians. In fact, Fionn has been in M$R for three years now: he is definitely, without question for us, the best drummer we’ve ever had (no disrespect to the previous drummers). He’s very creative and he’s really a ‘hands on’ type of guy… he gets involved in all aspects of the band: the business end, organizing stuff etc.; he has as much ownership to the band as the any of us.”

In regard to Million Dollar Reload‘s anticipated third studio album, Conalane indicated: “We recorded a bunch of songs at Rockfield in Wales with the intention of starting work on a new album. Neal Calderwood was the producer on our first two albums and he was brilliant, but we decided this time to force ourselves out of our comfort zone and go somewhere new and work with a different producer. We got Sean Douglas (who we have known for quite a few years – and, in fact, I played in a band with Sean years ago) to basically record the band live, which straight away brings a completely unique element to the sound and dynamic of the tracks. It was really enjoyable to record in such a famous studio, and with a friend of ours who was as hands on and involved as any member of the band. So, come August 15 [the band’s last show], we WILL have a new EP available at the end of the show.”