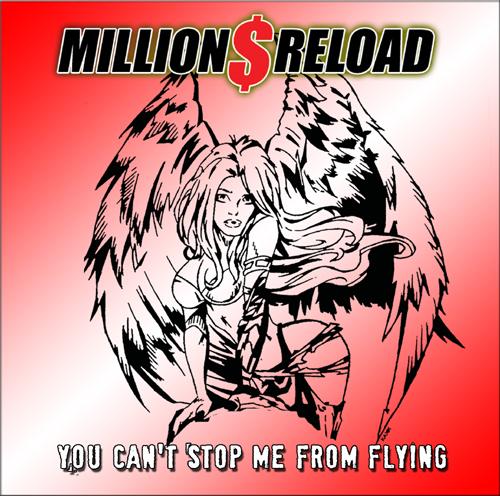 The 15-track album has already received international acclaim including reviews such as “This is a wheelie-bin boogie of the trashiest order” – Classic Rock Magazine, “…a debut album that is no filler and all killer is a hell of a way to start a career” – www.hardrockhouse.com and “Dirty, sleazy, bluesy, infectious, catchy, anthemic, drink friendly , smoking ban defying. That’s what this album is…All in all, my advice. Buy this album.” – www.imarocker.com.

ANTHEMS OF A DEGENERATION track listing:

Following a successful UK tour including an appearance at the Clive Aid show in Birmingham and a mind blowing show at The Camden Underworld, London, MILLION DOLLAR RELOAD headed to the US for a 10 date tour with Chicago based power trio The Black Molly’s. Word of mouth spread fast and sold out show followed sold out show – America was hooked on MILLION DOLLAR RELOAD’s brand of Rock N’ Roll!

Shows planed later in the year include the prestigious ‘Hard Rock Hell II’ event. HRHII is the second biggest rock event in the UK after Download and this year includes bands like Black Label Society, The Wildhearts and the legendary Thin Lizzy.

The first single, ‘YOU CAN’T STOP ME FROM FLYING’ will be available as download only bundle that will also include the anthemic ‘GOODNIGHT NEW YORK ‘ and exclusive new artwork.

‘YOU CAN’T STOP ME FROM FLYING’/’GOODNIGHT NEW YORK’ will be released on 22nd September. You can have a listen to the single as well as other songs from ‘ANTHEMS OF A DEGENERATION’ at www.myspace.com/milliondollarreload or www.limerecords.com