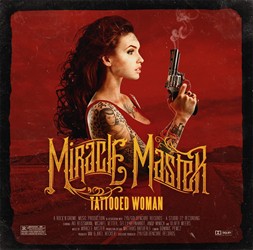 Miracle Master was formed out of the ashes of Pump and features Oliver Weers on vocals. Former Pump members Aki Reissmann (guitar), Selly Bernhardt (guitar), Andy Minich (drums) and Michael Vetter (bass) are all along for the ride — described as ‘nothing more than kick-ass hard rock’.

Recordings for ‘Tattooed Woman’ were done at Studio 22 in Germany and Medley Studios in Denmark. The album was produced, mixed and mastered by Miracle Master and Axel Heckert (Brainstorm, Symphorce).

a video teaser for the new album, created by Dominic Pencz of Pencz Art and Krone Camera Edit, can be viewed at www.youtube.com/watch?v=uVOPNSQVwBI.