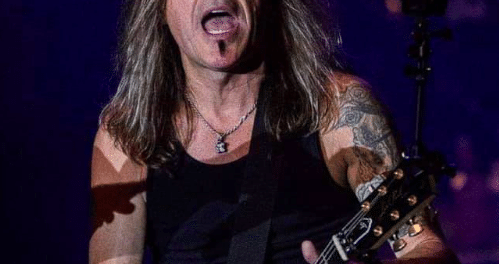 Great White frontman Mitch Malloy had to be rushed to hospital yesterday night but Slaughter guitarist Jeff Blando reportedly saved the day by handling lead vocals for a number of covers for the rest of the band’s set at the Mississippi State Fairgrounds in Jackson, Mississippi, USA. Both Great White and Slaughter were slated to play that evening. 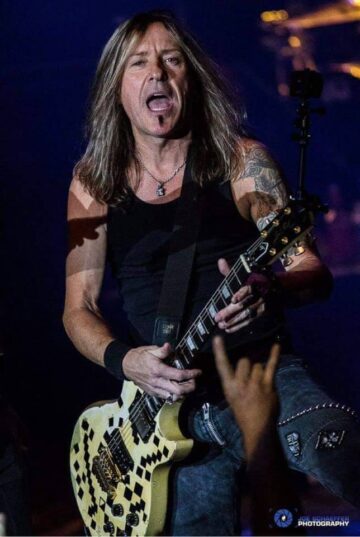 “I was at the show. Slaughter played a great set of their tunes including a tribute to Van Halen.

It was later announced before Great White started that Mitch Malloy had a medical emergency and was rushed to the hospital. Then was announced the rest of Great White and some members of Slaughter would be jamming some unrehearsed covers together. Slaughter guitarist Jeff Blando helped save the night by singing and playing various songs by Zeppelin, AC/DC, ZZ Top, Whitesnake, etc with both GW and Slaughter drummers swapping places for different songs. The set ended with Once Bitten Twice Shy with keyboard player Michael Lardie singing.

As for Mitch, here’s what happened…”

“Mitch would like to thank everyone for reaching out and sending their thoughts and prayers this morning. Last night before the Great White show (where socially distanced measures were taken) at the Mississippi State Fairgrounds, he had a serious allergic reaction triggered by a long-standing food allergy. Mitch would especially like to thank the first responders and the University of Mississippi Medical Center for their excellent and prompt care. Mitch is already home in Florida resting and recuperating.” 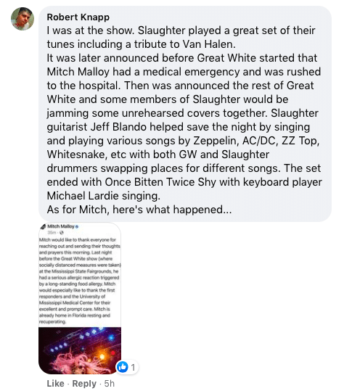