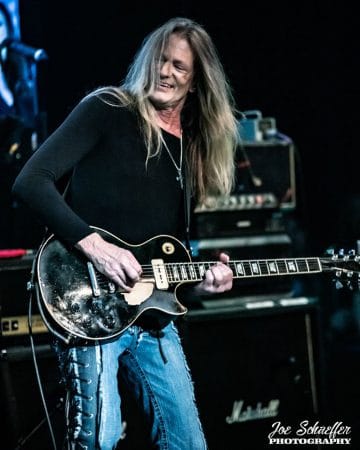 The guitarist was asked to comment on his experience with some of the bands that he has played in or with.

With respect to Faster Pussycat, Perry indicated: “Yeah, I played on an album. I played on their first record. I played the song Babylon. That’s me on the guitar solo. It’s funny, Taime Downe was my next-door neighbor at the time, and Ric Browde was a good friend of mine from New York when I was living there when I was managed by Leiber and Krebs. So that’s how I wound up on that record.”

In regard to Keel, Perry stated: “It was great. I didn’t play with Keel, I played on their album, but I played in Steeler with Ron Keel. I replaced Yngwie in that. Again, great times. I mean it was at the forefront of all the LA metal stuff back then. I mean, so the shows were absolutely great and the band was on fire.”

In terms of replacing guitarists such as Yngwie J. Malmsteen and Randy Rhoads, Perry advised: “Yeah, I was looking at this, I replaced Randy in the Quiet Riot thing. I mean basically the truth of that is Greg Leon and I did, because there were two guitar players and DuBrow, whereas there’s one guitar player in Quiet Riot. So there’s that, there’s the Yngwie thing, but then a little known fact is I actually replaced Steve Vai in David Lee Roth’s band. Yeah, I did that for about two weeks and we went our separate ways. It’s funny because I also even replaced Guthrie Govan in John Payne’s Asia and he’s another phenomenal, phenomenal guitar player.”

You can read the rest of the interview with Mitch Perry by media journalist Mark Dean at Antihero Magazine‘s website.